Brooches are traditionally defined as an ornament fastened to clothing with a hinged pin and catch. Throughout history, brooches have had the special ability to reflect both timely fashion trends and deeper cultural influences. How do brooches still serve as functional and symbolic statement pieces in today’s wardrobe?

Brooches or brooch pins were initially created for functional use in the Bronze Age as fastenings to secure cloaks, scarves and capes. Prior to the Middle Ages, they were known as fibula, for which materials such as thorns, flints, and sticks were used. By the (late) Byzantine period, brooches underwent a more ornamental makeover to become decorative displays of jewels and craftsmanship.

Starting in the fourteenth century, the Renaissance was a time of wealth and opulence. Elaborate brooches covered in gemstones or pearls were in fashion, especially amongst the noble and merchant classes. Gemstones were believed to have protective qualities, including emeralds, diamonds, rubies, amethyst and topaz. During the fifteenth century, advances in cutting techniques resulted in new gemstone shapes, while brooches with religious motifs and enamelled miniature portraits also became popular. From the 1500s onwards, global exploration introduced new sources of diamonds, gems, pearls and precious metals in Europe and Great Britain. Jewellery styles closely followed the rapid changes in clothing fashion during this era. By the sixteenth and seventeenth centuries in Europe, brooches were not only valued for their ornamental qualities but also as symbols of wealth and power. They often featured an ornate combination of precious metals, gemstones, pearls, three-dimensional scenes, carvings and intricate metalwork. From the late seventeenth century onwards, aigrette brooches became the height of fashion. Largely associated with the elaborate wardrobes of the gentry on their ‘Grand Tour’ of Europe, these brooches were often feathershaped and set with flat-cut diamonds or garnets in silver settings. They could be worn in the hair and were very detailed, sometimes with tiny birds flying around the plume.

Ornate style brooches with complex designs were fashionable through the first half of the eighteenth century. By the mid to late 1700s simpler forms and designs inspired by Neoclassicism became more common, with simpler themes of nature, bows, miniature portraits and animals. Typically handmade in gold or silver, diamonds and pearls continued to be popular throughout this period. During this time, brooches were typically foil backed and had closed back settings. This was to enhance or change the colour and lustre of the gemstone. A key innovation during this period was the advent of hard paste cameos by the English pottery maker Josiah Wedgewood. Cameo brooches, depicted portrait silhouettes or classical scenes. Hand painted miniatures also became extremely popular and a preferred way to carry portraits of loved ones.

Throughout the eighteenth and nineteenth century, the En Tremblant brooch (French for ‘tremble’) was another highly praised style. This trembling effect was created by bouquets of gemstones delicately moved to catch the light, which was the key to their popularity before the advent of electricity. Normally set with rose-cut or old-mine cut diamonds, this style of brooch often resembled a floral form or flower spray. The centre of the flower was attached to a mechanism that allowed it to quiver when worn – this enhanced the sparkle at fancy dinners by candle light.

During the Victorian era, brooch styles turned heavier and more sombre, using materials like black enamel, jet, and black onyx. Their fascination with mortality was perfectly reflected in a ‘mourning brooch’. Made to be worn with the all black mourning outfits of that time, the brooches were more discreet, often featuring engravings of the date of the deceased and a removable glass panel to store a lock of hair.

Towards the end of the nineteenth century designs for jewellery started to embraced naturalism; often depicting accurate manifestations of objects and figures from nature, such as insects, butterflies and flowers. This approach was typical of the Belle Epoque movement, for which designer René Lalique (1860- 1945) became synonymous with. During the Belle Epoque movement in France and the Edwardian era in England, these soft, feminine pieces continued to flourish into the first decade of the twentieth century.

Following World War I, jewellery saw a dramatic shift. In the 1920s, brooches moved away from soft, naturalistic designs and Art Deco picked up steam. Ribbons and bows were out; emeralds and diamonds were in. As the Art Deco aesthetic came into fashion, brooches followed suit with bolder structures, highcontrast colour palettes, geometric shapes and abstract designs inspired by designs from Cubism, Fauvism, and art motifs from Egypt and India. Materials used included black onyx, coral, quartz, lapis and carnelian alongside classic stones such as diamonds, rubies, emeralds and sapphires. One of the most famous jewellery houses associated with Art Deco was Cartier, whose brooches featured geometric lines and strong, high-contrast gem colours – usually in a double-clip style. In the first half of the twentieth century, artists such as Salvador Dali and Alexander Calder were also dabbling with brooch designs, which manifested smaller versions of their masterpieces. Due to scarcity of materials during World War II, the production of brooches did not pick up again until the late 1940s and 1950s. Cartier’s famous Panther brooch was created in 1949 for the Duchess of Windsor (1896-1986) in yellow gold, emeralds, and black enamel. Although it was an iconic emblem of the French jewellery house since 1914, this was the first time that the panther was represented in its entirety. This design was later reproduced in other materials.

Designs also started to reflect the abstract qualities of art deco during the 1950s, but this time, with more dramatic effect. As such, brooches were designed to move with the wearer. The 1960s saw a return to the natural motifs of Art Nouveau, but with a bolder, more modern approach. The designs were well structured and exacting, demanding meticulous detail in an attempt to create realistic representations of insects, leaves, birds and trees.

In the early twentieth century, it was all about traditional diamonds, rubies and sapphires. Yet, the improvement of technology and the discovery of multiple colourful gemstones in the 1970s and ’80s, brought more subtle shades of sky blue, yellowish greens and soft pinks. Together with the mainstay of gold as a primary setting, brooches were more bold and eccentric than they had ever been. Arguably leading the change in this was the Italian jewellery house Bulgari.

During the 1990s and 2000s, brooch motifs themselves did not dramatically change. However, the modern era ushered in material changes that continue to influence designs today. Recently, designers began experimenting with new and materials, such as titanium and wood, providing more flexibility in the size and shape of brooches.

The use of the brooch for its symbolic powers is still popular today. For example, the female members of the British Royal family are known to use brooches to reinforce diplomatic relations. Other women in high powered positions also wear brooches as subtle political statements and jewellery designs have reflected this social development, becoming bolder and somewhat less delicate. 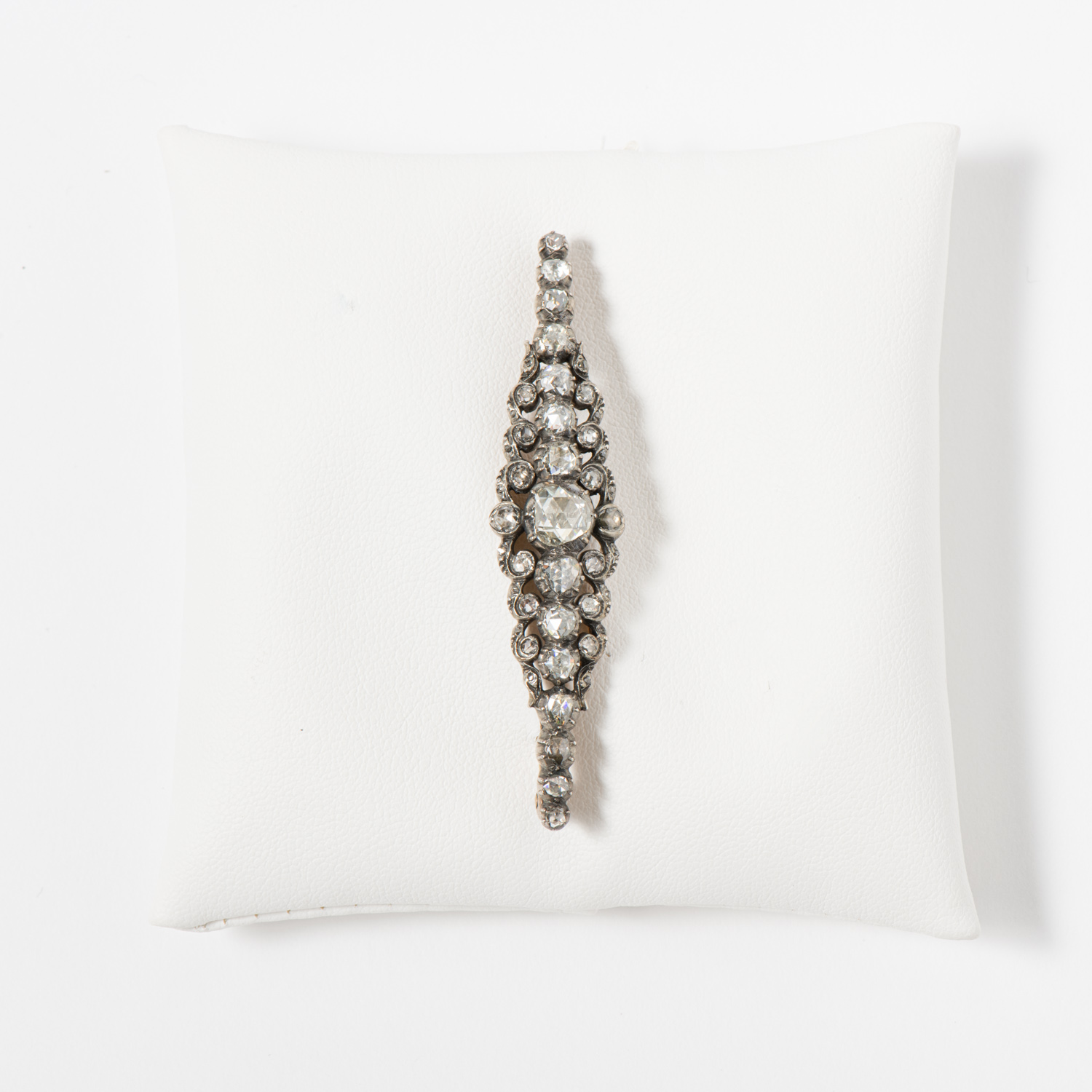 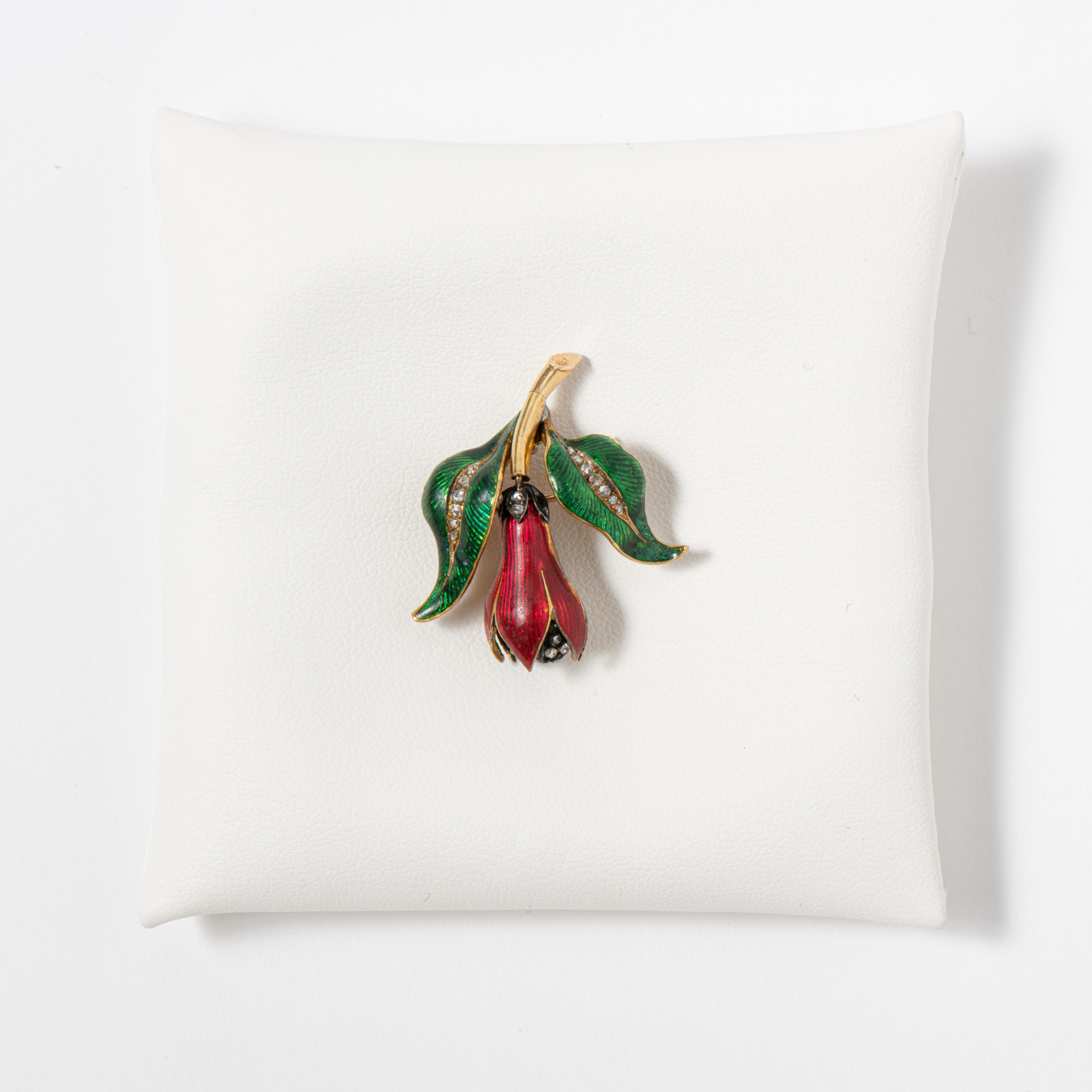 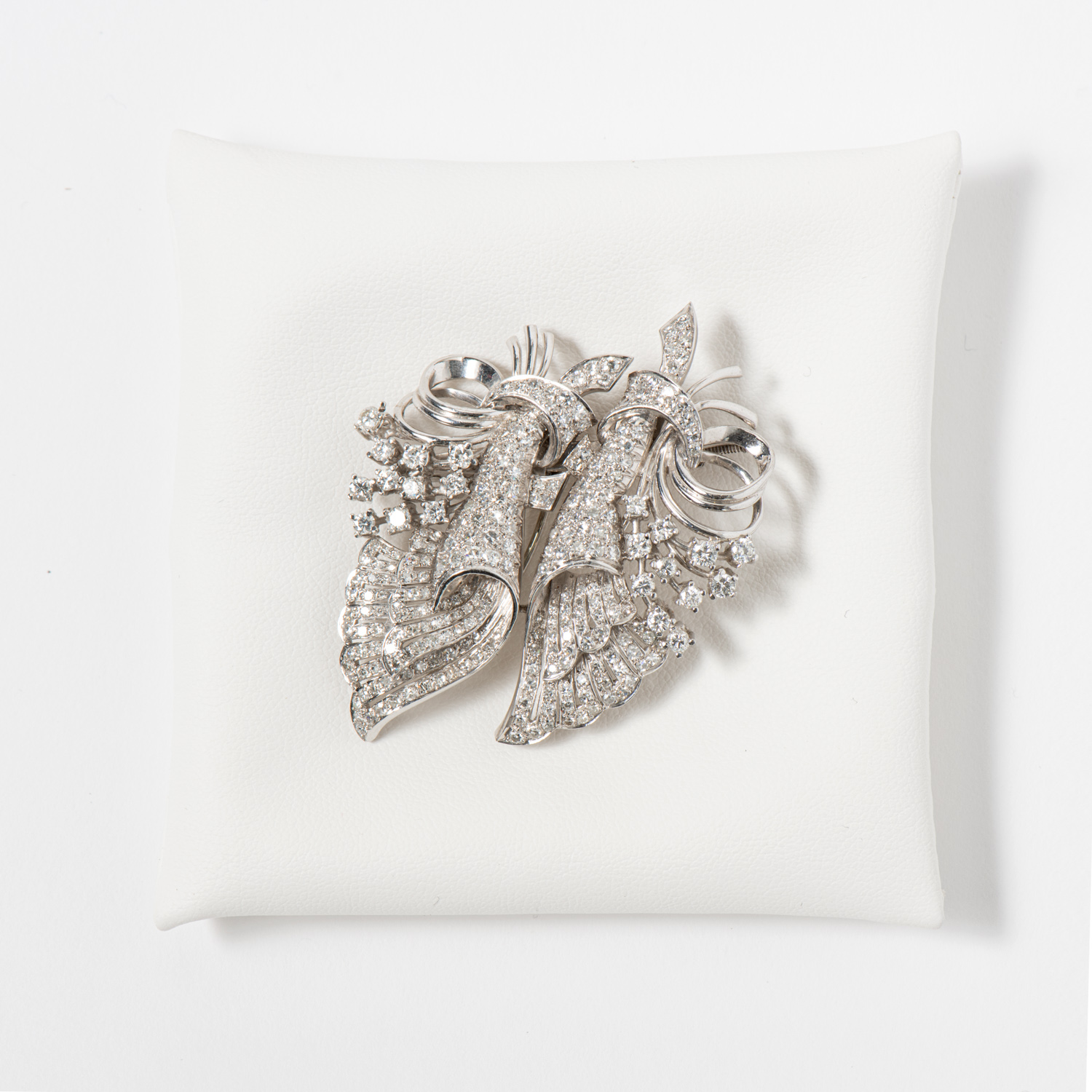 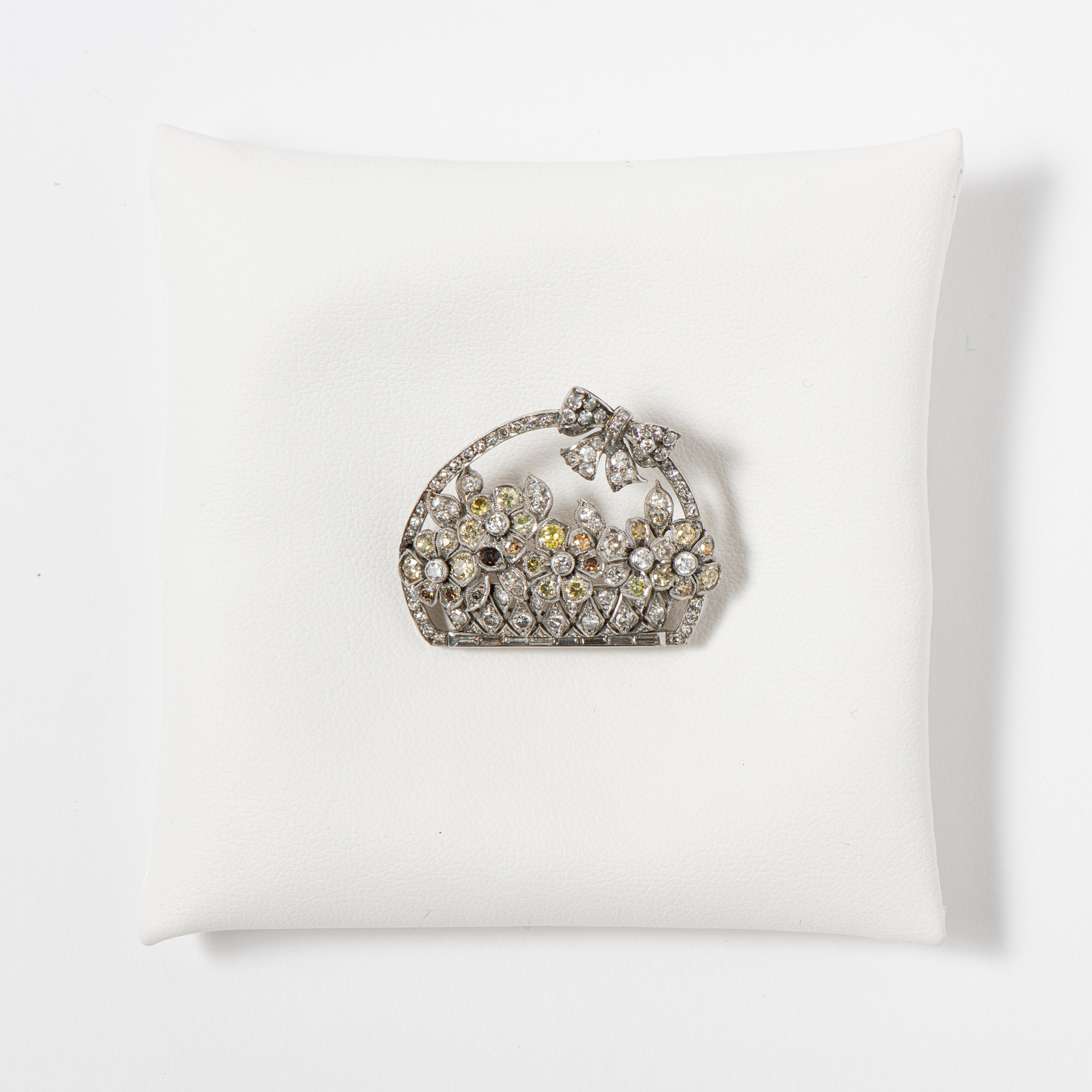 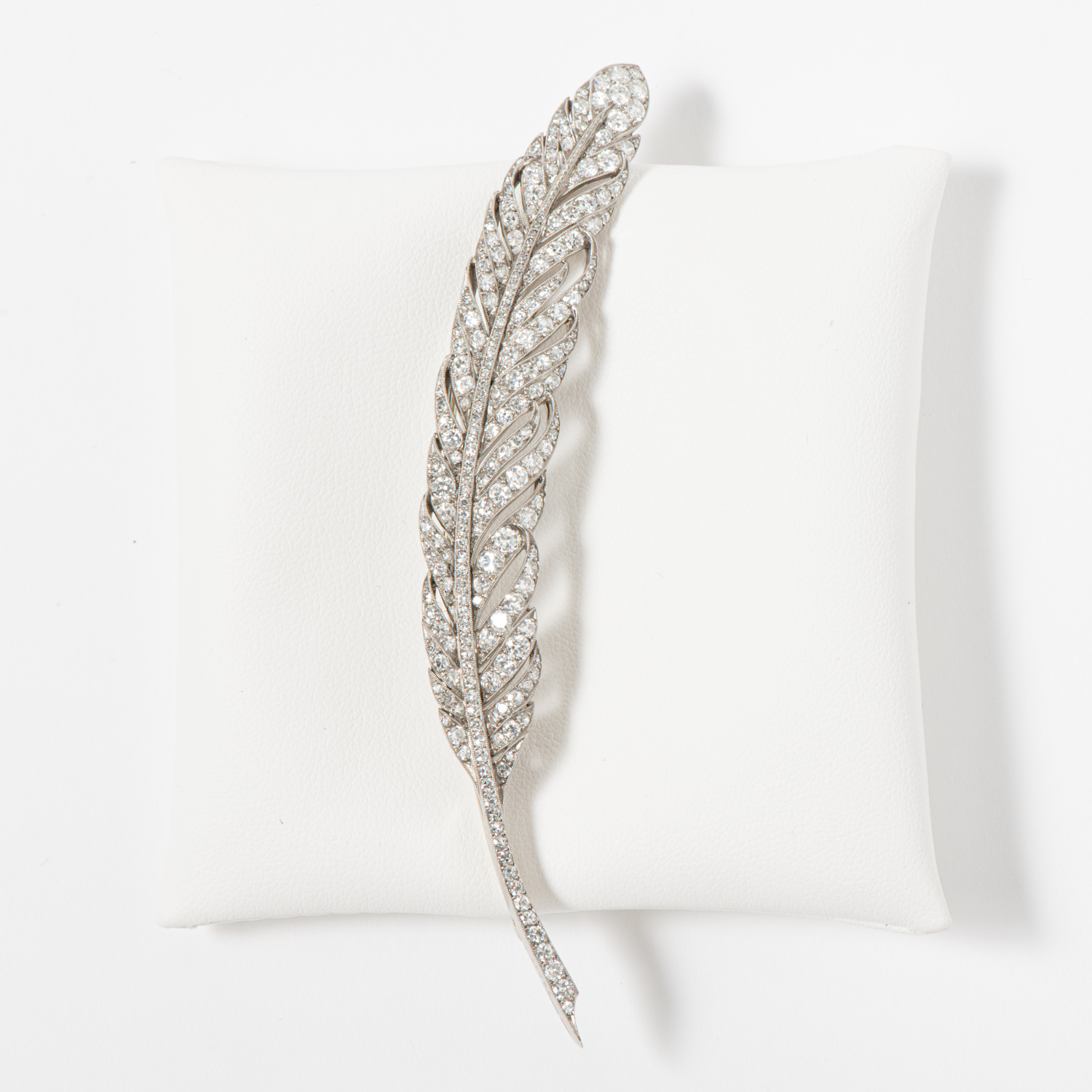