Josef Ongenae was one of the first geometric abstract artists to emerge in post-war Holland and Belgium. He worked in an impersonal, geometric, and objective style reminiscent of the non-representational painting of such Dutch artists as Piet Mondrian (1872-1944) and other members of the artistic movement De Stijl (1917-1931).

Born and raised in Antwerp, Ongenae liked to draw and started to develop a strong interest in Western and Eastern philosophy and religion at a young age. As a child, he read the theories of Kant, Soloviev, and Blavatsky and made drawings that often showed a very far-reaching degree of abstraction. When he was 18 years old, Ongenae became an apprentice illustrator at an advertising agency in his hometown. During this time, an illustrator at this agency introduced him to Theosophy, a movement that emerged in the late 1800s, when people were breaking away from traditional beliefs and seeking new ways of acquiring knowledge and understanding. It encourages the search for the common core of science, philosophy, and religion under the motto “no religion above truth“. This idea appealed to Ongenae so much that he eventually joined the Theosophical Society in Antwerp. Here he became acquainted with the writings of the Leadbeater, Besant and Krishnamurti.

Around 1943, Ongenae went into hiding at his cousin’s house in Antwerp to evade being taken for forced labour in Germany. At this hiding place, he met the painters Jan Cox (1919-1980) and Marc Mendelson (1915-2013), who had rented a studio in the same house. These unforeseen circumstances turned out to be very important for the start of Ongenae’s career as an artist, as the two painters were very interested in his drawing and encouraged him to continue with his personal work while focusing on an ‘automatic’ drawing style. Cox, for his part, was the first to introduce Ongenae to reproductions of works by Pablo Picasso (1881-1973), Georges Braque (1882-1963), and Wassily Kandinsky (1866-1944). This inspired Ongenae to paint himself, and therefore, Cox taught him some fundamentals, which were the only lessons Ongenae ever enjoyed in this domain.

During the war and shortly after, Ongenae worked mainly in a figurative style. His paintings remained limited to still-lifes in which his interest in the post-cubist oeuvre can be seen. From 1947, Ongenae also began painting landscapes, especially tree studies, in a rather free painting style, almost akin to expressionism. Gradually, his trees became more and more stylized in form, ultimately resulting in nearly completely abstract compositions of horizontally and vertically disposed straight and curved lines in whites, greys, and blacks. Just as Mondrian, Ongenae developed his approach under the influence of cubism. 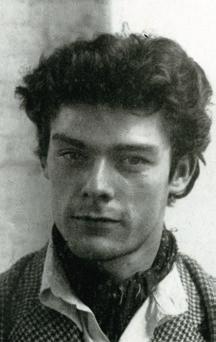 In 1947, Ongenae moved to Brussels, where he met the Dutch sculptor André Volten (1925-2002). Both interested in abstract art, the artists struck up a friendship so close that, when in 1950, Volten decided to return to Amsterdam, it did not stop them from seeing each other often. Ongenae started to divide his time between Belgium and Holland, and even obtained himself a temporary post at the Stedelijk Museum in Amsterdam. While helping with the installation of an exhibition about De Stijl, Ongenae sees the work of Mondrian and Kasimir Malevich (1879-1935) for the first time. Inspired by Mondrian’s visual language, Ongenae’s compositions became wholly abstract. Because his paintings are not dated, it is hard to precisely ascertain the point in time when this change to full abstraction took place. The shift probably took place after 1951, since in that year an art critic of De Standaard remarked the following about a joint exhibition: “In contrast to Volten, moreover, Ongenae is not completely abstract. With him, we still perceive a minimum of relation to an albeit extremely schematized nature.“

Ongenae immersed himself in the theories of Mondrian and Theo van Doesburg (1883-1931), and in the theosophical writings that had been an important source of inspiration for Mondrian’s ‘neoplasticism’. Neoplasticism was an abstract art style that endeavoured to reduce the aesthetic experience to its most basic components to express the harmony of the human spirit. Ongenae felt strongly drawn to the paintings of Mondrian, and so he began to construct his compositions from horizontally and vertically placed rectangles and squares on a white background. Also, his use of colour started to adapt to the idiom of De Stijl.

In 1955, Ongenae co-founded the artist group Liga Nieuw Beelden (1955-1969). This was a merger of artists from various movements, and consisted of visual artists and several architects, who together strived for a unity between art and life. In this way, art would no longer exist as an isolated phenomenon but be integrated into social life. In the Liga Nieuw Beelden, the separately working artists would be brought into contact with each other to undertake joint activities. Ongenae took part in the working groups and participated in nearly all the exhibitions in the 1950s.

In the same year that Ongenae co-founded Liga Nieuw Beelden, he started to order his colour planes and lines analogously to musical rhythms, just as Mondrian did. Aside from jazz and bebop, he was also open to the influence of Indian classical music and dance. In dancing, he recognised the same mathematical principles as those he was attempting to express in his art. In some of his titles from this period, Ongenae also refers to other facets of Hindu culture, thereby showing his abiding passion for Eastern philosophy and religion.

Because Onegnae’s art sometimes remained very close to that of Mondrian, he sought a way to bring a new face to neoplastic imagery. However, it was only in the 1960s that Ongenae fully succeeded in providing a personal signature to the compositional construction of his paintings. Meanwhile, he had immersed himself in Mondrian’s New York paintings. This influence is readily seen in the fact that Ongenae also often painted his lines using yellow, red, blue, and grey, with intersections in contrasting colours. Just as Mondrian’s Broadway Boogie Woogie (1942-43), Ongenae sometimes constructed his lines from short, coloured segments, providing a more dynamic character to his compositions. But unlike Mondrian, he also tried to achieve this goal by giving more attention to the texture of the paint. By applying his brushstrokes in different directions, he tried to amplify the impression of movement.

Up until 1986, the year he stopped painting, Ongenae continued to search for new ways to give adequate expression to this concept. Looking back, he described his art as an ongoing experiment to that end. 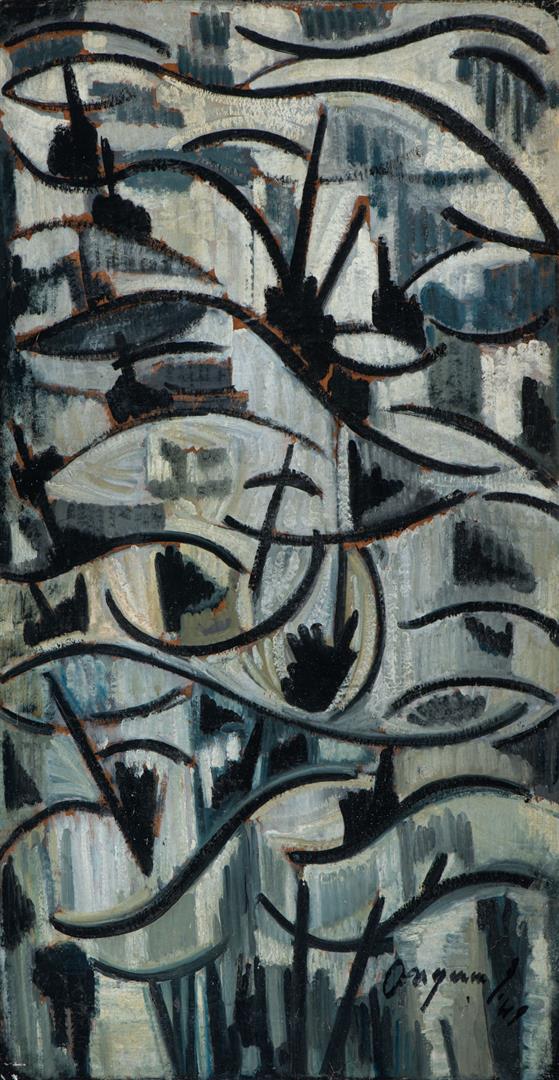 Signed and dated '49 lower right Signed and dated 49 on the reverse Oil on canvas laid down on board, 139.4 x 72 cm Provenance: Collection Petra Verbeek & Josef Ongenae, thence by descent 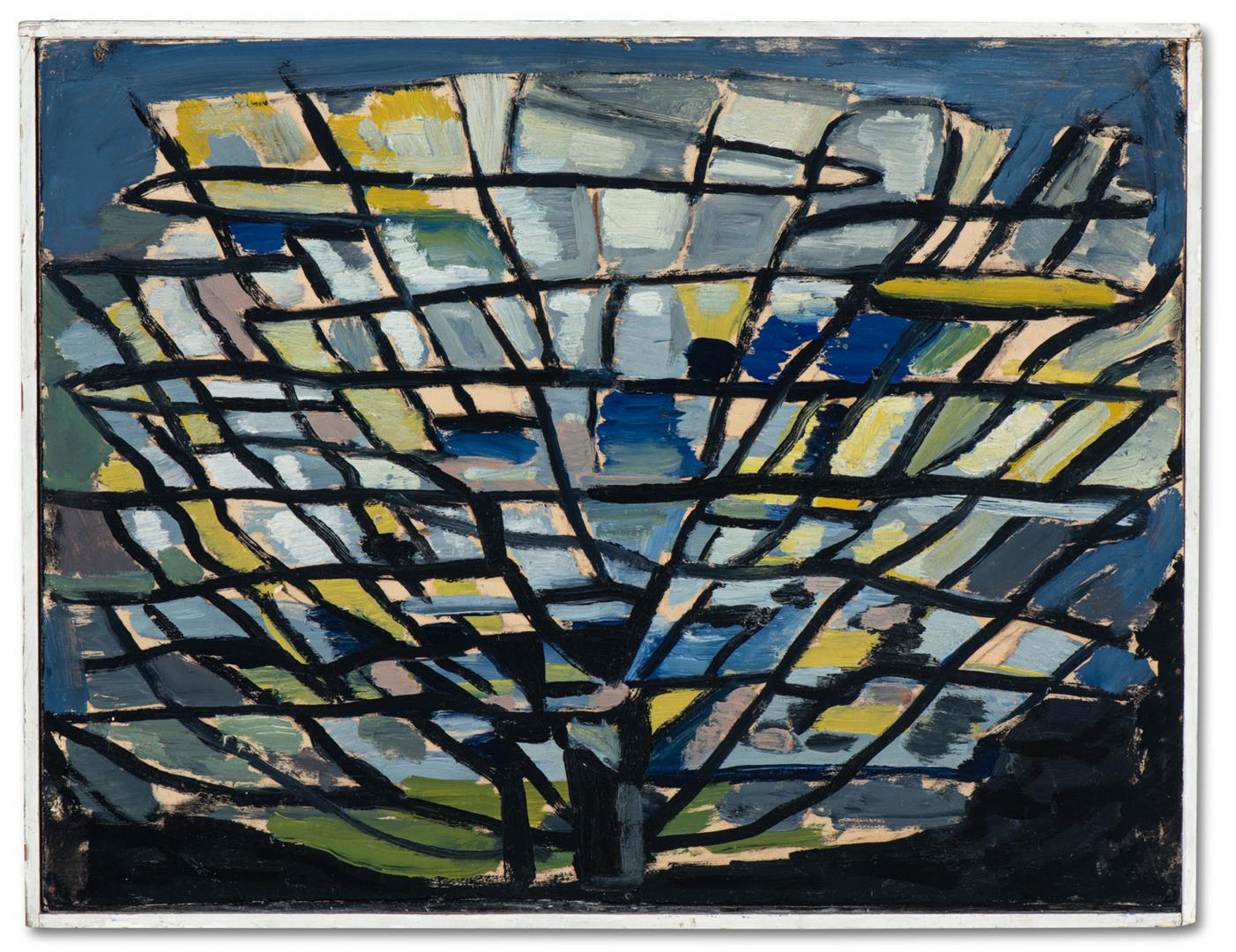 Signed, annotated Anvers and annotated '59 (the date the artist gifted this work to his partner) on the reverse Oil on paper laid down on board, 55.2 x 72.4 cm Provenance: Collection Petra Verbeek & Josef Ongenae, thence by descent Note: In artist's frame. 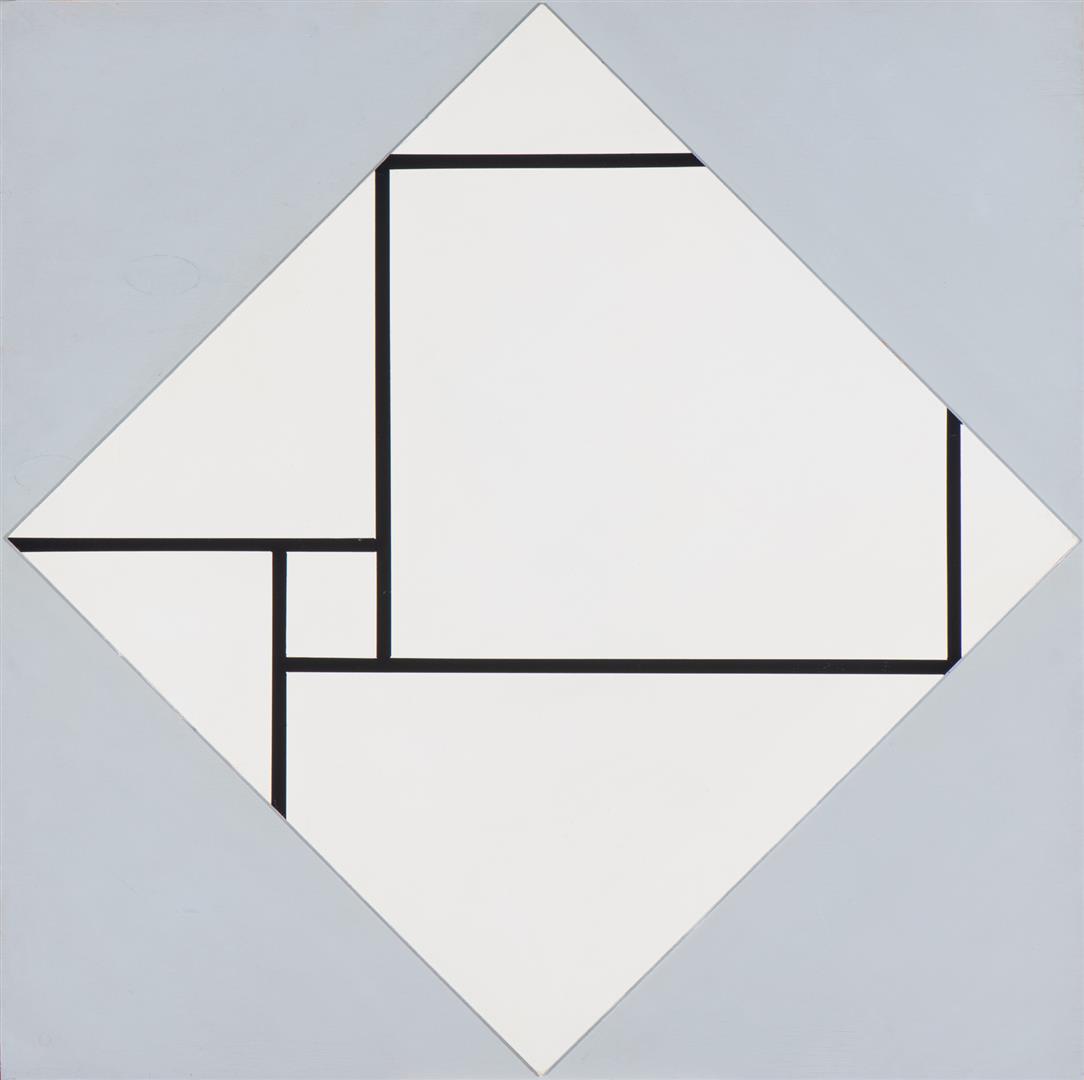 Signed, titled and dated 1968 on the reverse Oil on panel on board, 87 x 87.2 cm Provenance: Collection Petra Verbeek & Josef Ongenae, thence by descent