Intuition and mathematics; this paradox could be used when describing the art of the Dutch artist Jaap Egmond, who is best known for his abstract reliefs and became a representative of minimalism in the Netherlands in the 1970s and 1980s.

Born in New York as the son of a Dutch sea captain, Egmond and his family moved back to Amsterdam, due to the threat of World War I, where he attended many drawing classes. The academic studies he made during this time that have survived show his skills as a draftsman. Besides being blessed with a great talent for drawing, Egmond was also a gifted pianist. As a young man, the choice between music and visual arts was too difficult, so he decided to choose both; he enrolled at the Amsterdam Conservatorium, where he studied piano, while also studying to become a drawing teacher at the Rijksinstituut tot Opleiding van Tekenleraren. When Egmond finished his studies, he started working as a drawing teacher, first at the Vossius Gymnasium and, a few years later, at the Nursery School (later known as the Bouman Academy). 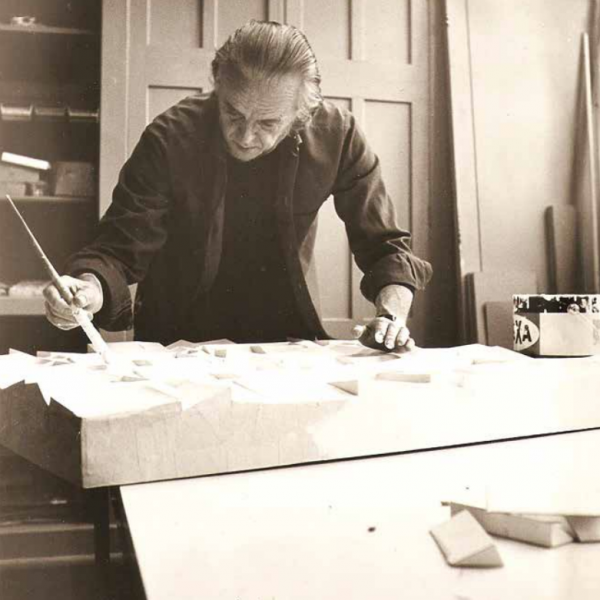 Besides teaching, Egmond closely follows all modern developments in art. He fell under the spell of modernism while discovering De Stijl, founded by Mondriaan, (komma) Le Corbusier’s New Building and the CoBrA Group, with the illustrious Willem Sandberg as director of the Stedelijk Museum. As a frequent visitor to this museum, he came into contact with the art of the Nul Group, the Dutch arm of the international ZERO movement (including artists like Piero Manzoni and Lucio Fontana). The Zero Group (often styled as “ZERO”) was a loosely knit group of artists that emerged in Germany and spread to other European countries in the 1950s, led by Heinz Mack, Otto Piene, and Günther Uecker. The artists came together with the collective desire to move away from subjective post-war movements like the French Art Informel and Tachisme. The main idea was to create art that was purely about the work’s materials and the world in which those materials exist, de-emphasizing the role of the artist’s hand. The focus was on light and space. Monochromy and the repetition of similar elements were important features in the artwork of these artists. Egmond was particularly fascinated by the Nul group’s focus on monochromy and repetition of forms.

After almost 30 years of teaching and writing textbooks, Egmond finally found his way back as an artist. In 1968, Egmond sets up studio in Amstelveen, where he focused solely on his own artistic output. It was a period that was dominated by the question of which direction he should go and what would be important to him in contemporary art. He found the answer in the combination of mathematics and the visual arts, which he translated into abstract geometric art – absolute simplicity with a mathematical background. In his studio in Amstelveen, he started making paper reliefs; he applied cardboard patches to a square surface, which he covered with newspaper, and then painted over with snowwhite latex paint, which he bought at the Hema (a Dutch chain store). By arranging fewer or more uniform elements, depending on the light, he created the rhythm of the tilting surfaces. On the reverse of these artworks, he wrote down which Hema paint he had used. Egmond did not mind if an owner would refresh a dusty or discoloured relief with a lick of paint because it is the play of light and shadow that is essential for the white paper reliefs.

Egmond’s work is often compared to that of the Dutch Nul Group and, in particular, with that of Jan Schoonhoven (1914–1994). In terms of appearance, technique, and use of materials, the art of both artists unmistakably shows similarity, but the difference lies in the origin. The work of Schoonhoven was certainly an inspiration, although Egmond’s style eventually developed in a different direction. Where Schoonhoven mainly worked intuitively, Jaap Egmond took a thoughtful direction towards constructivism. Schoonhoven started with intuition and searched for visual beauty. His works were ‘created’ by him. Egmond, on the other hand, based himself on completely different ordering principles: mathematical formulas and calculations, which he carefully thought out beforehand. How he proceeded can be clearly seen in his design books; he sketched his ideas on graph paper with arrows indicating exactly at which angle and in which direction the strips should be placed.

In the 1970s, Egmond’s work took off. He started exhibiting, first in art halls and galleries. In 1976, he participated with members of the Dutch Circle of Sculptors in a major exhibition at the Stedelijk Museum in Amsterdam. The municipality of Amstelveen offered him a room in the former primary school on Dorpsstraat, where he spent all his free hours. He became friends with his neighbours, the artists Jan Verschoor and Rob Brünnmayer, whom he bought work from, and Verschoor and Egmond exhibited together. Years later, Verschoor moved into the former studio of his good friend Egmond.

At the beginning of the 1980s, Egmond started to carry out his reliefs in wood and ‘brushed’ stainless steel. They became large, freestanding statues based on mathematical-geometric principles. But they also have a certain playfulness. The light reflects on the surfaces, giving them a cold appearance or a golden glow. Egmond also came to the implementation of the well-known paper-maché reliefs—by glueing on bits of newspaper, later also to metal reliefs and freestanding works. Colour was not necessary; he covered everything with a monochrome layer of white. Egmond counted himself among the ‘colourless’. Only at the end of his career did he come back from that and started making highly colourful oil paintings and murals.

The titles of Egmond’s works are often level-headed, such as “square programming” or “sectioned square.” Moreover, his works are not signed, or are signed only with “e.” These reliefs were founded on mathematical formulas. Despite appearing in random order, in reality, everything is formatted to perfection.

Egmond’s work was shown to the public through exhibitions in various galleries, beginning in Amsterdam and later throughout the country. Egmond was a constructivist first and foremost, and his work was heavily influenced by the Zero movement. To this day, his work is still sought after by many collectors. 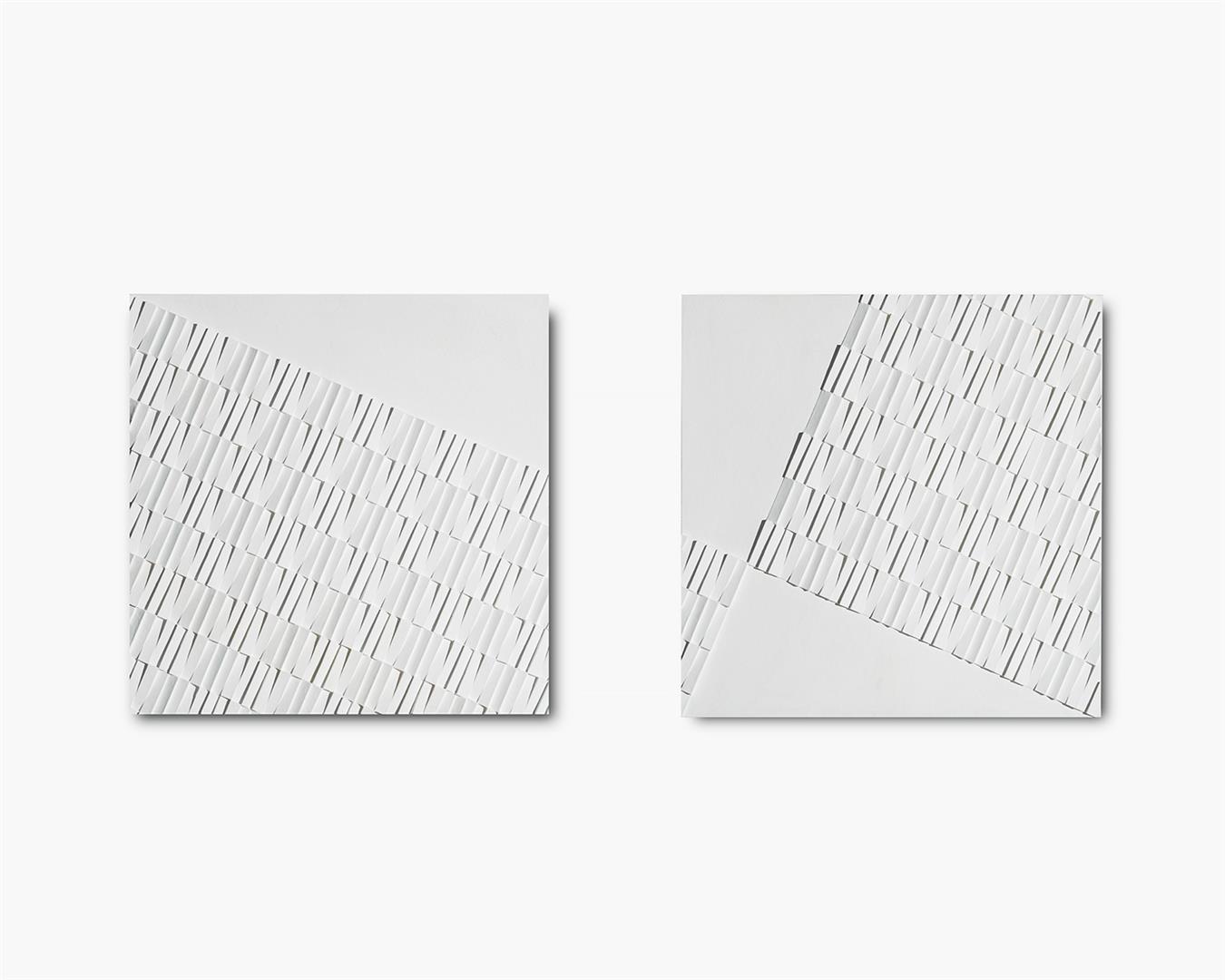 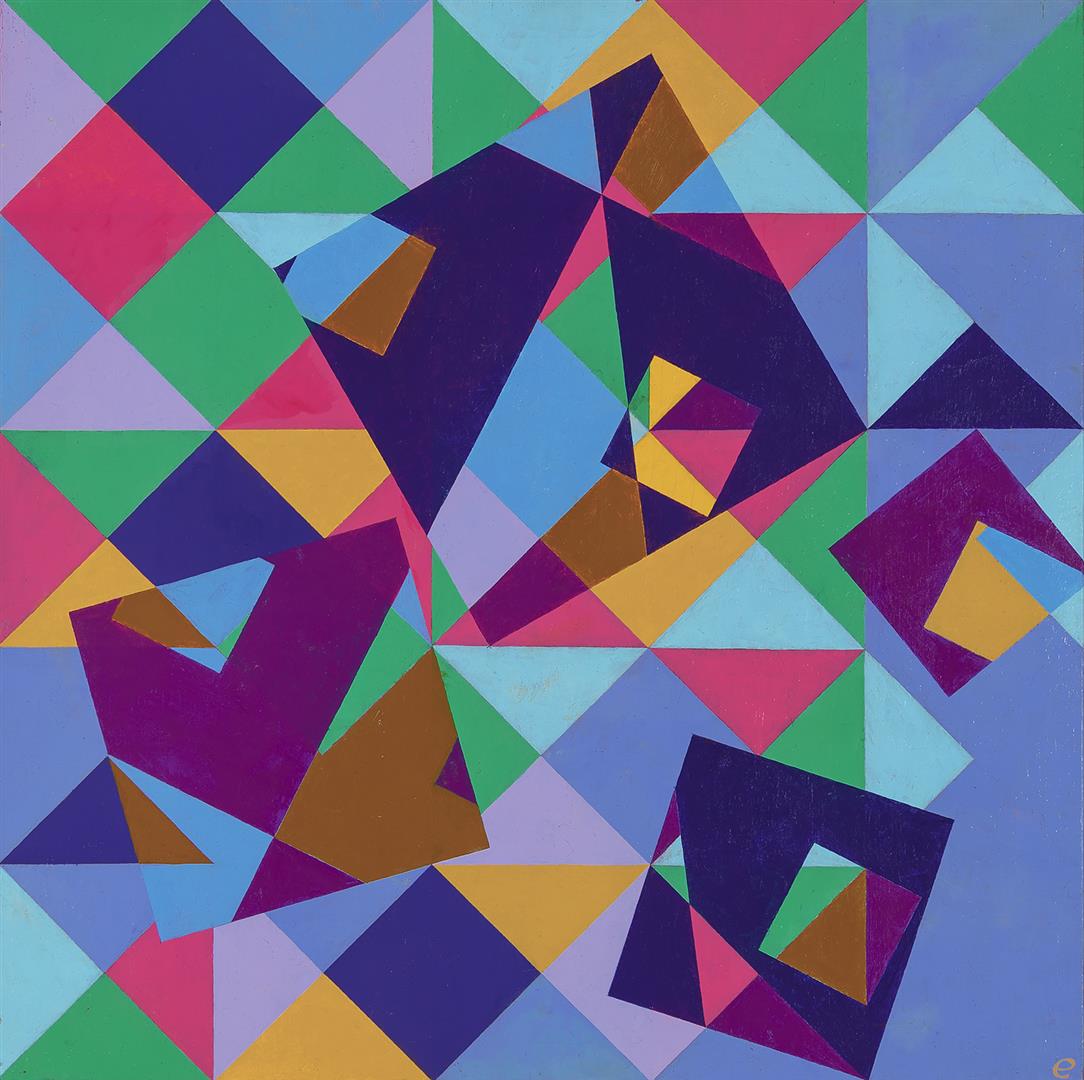