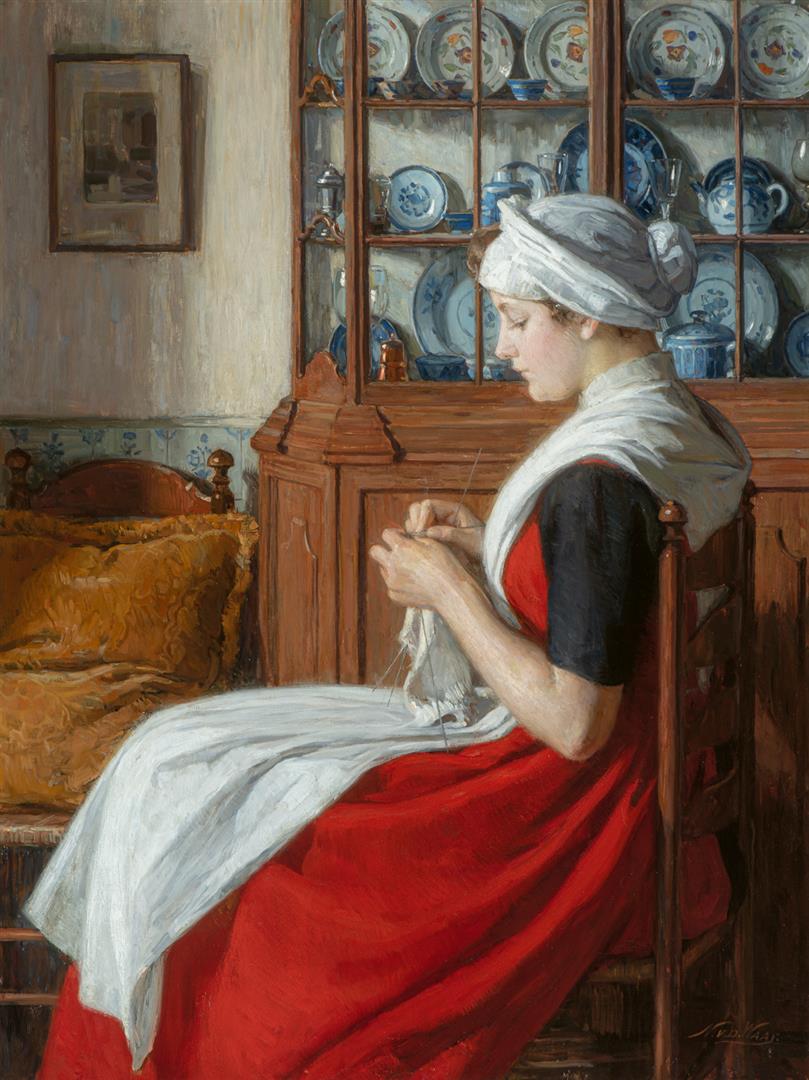 Nicolaas van der Waay
(Amsterdam 1855 – 1936)
An Amsterdam Orphan Girl Knitting in an Interior
Signed lower right
Oil on canvas, 100.2 x 75.5 cm
Provenance:
Private collection, the Netherlands
Note:
The Dutch artist Nicolaas van der Waay worked in many genres – including stamp, coin and banknote designs. At a time when modern art rapidly gained ground, Van der Waay continued to adopt a classical academic style. As such, he is perhaps best known for the allegorical illustrations he created for the Golden Coach and a series of paintings depicting the lives of girls from the Amsterdam Orphanage (the ‘Burgerweeshuis’). The Burgerweeshuis, located between the Kalverstraat, the Begijnhof, the Nieuwezijds Voorburgwal and the Sint Luciënsteeg, came into use in 1580, when the orphans moved into the former Sint Luciënklooster. The Burgerweeshuis was praised because of the good education the orphans received; besides attending classes, the orphans learned many crafts. For example, the boys became known with the act of woodworking, while the girls were taught needlework – the latter shown in this painting.
The orphan girls (popularly known as ‘burgerweesmeisjes’), with their red and black costumes and the snow-white shawls and hats, were striking appearances in Amsterdam city life at the end of the nineteenth century. The eye-catching clothing was mainly chosen for the sake of recognisability and thus to make it easier to check for possible misconduct, especially outside the gates of the orphanage. The combination of red and black was derived from the Amsterdam city coat of arms.