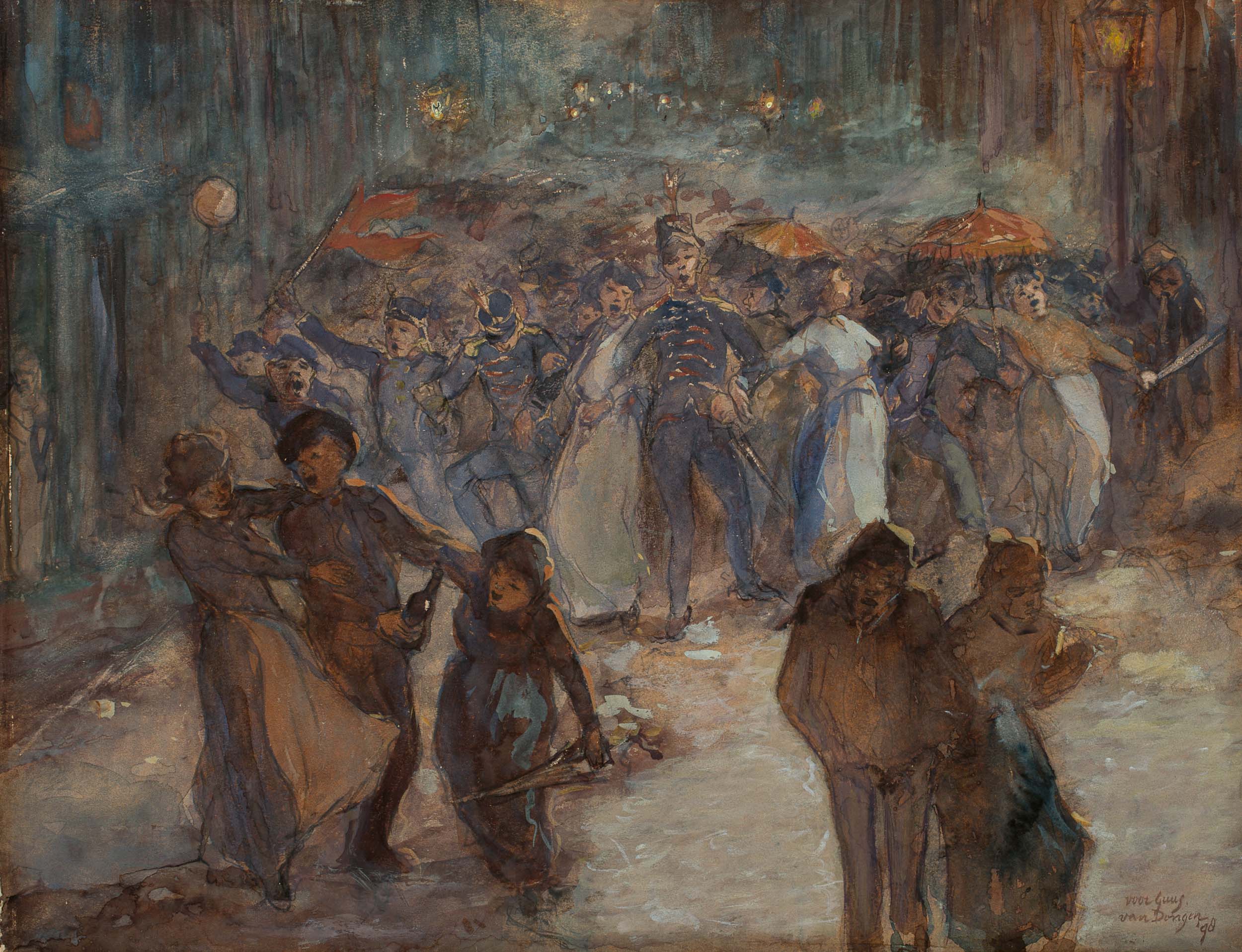 Kees van Dongen
(Delfshaven 1877 – Monte Carlo 1968)
Optocht Tijdens een Oranjefeest te Rotterdam (Procession During an Oranjefeest in Rotterdam)
Signed, dated ’98 and annotated voor Guus lower right
Watercolour and chalk on paper, 36.1 x 46.3 cm
Provenance:
– Private collection, the Netherlands
– Auction Mak van Waay, Amsterdam, 28 November 1972, no. 213, lot 54
– Private collection, the Netherlands, thence by descent to the present owner
Literature:
G. Diehl, Van Dongen, Uffici Press, Lugano, 1969, p. 24
Note:
Van Dongen portrayed the festivities in Rotterdam, celebrating the crowning of Queen Wilhelmina in 1898. Van Dongen executed this watercolour, in which he took complete liberty to portray the unstoppable partygoers, the year before he left Rotterdam to settle in Paris. The eminent art historian and critic Gaston Diehl described this period in Van Dongen’s oeuvre as follows: “[…] At that time, van Dongen certainly must have been familiar with that famous satiric French weekly Gil Blas, since he collaborated in the illustrations of the local daily paper, the Rotterdamsche Nieuwsblad. In his reporting and in his witty drawings he quickly learned how to fit in with whatever style was currently in fashion, as is demonstrated by one of his plates, found in the newspaper by Chaumeil, dated 1899, having to do with the celebrations surrounding the crowning of Queen Wilhelmina. He doubtless had to take into consideration the rather severe atmosphere of the country [the Netherlands], where too licentious drawings were hardly acceptable, and the fact that his family was rather alarmed by his obvious proclivities. The solution to this was to move to Paris, a move he made, for good, in 1899.”

The work is annoted Guus, referring to the German-born Dutch painter Juliana Augusta “Guus” Preitinger who became wife to Kees van Dongen in 1901.