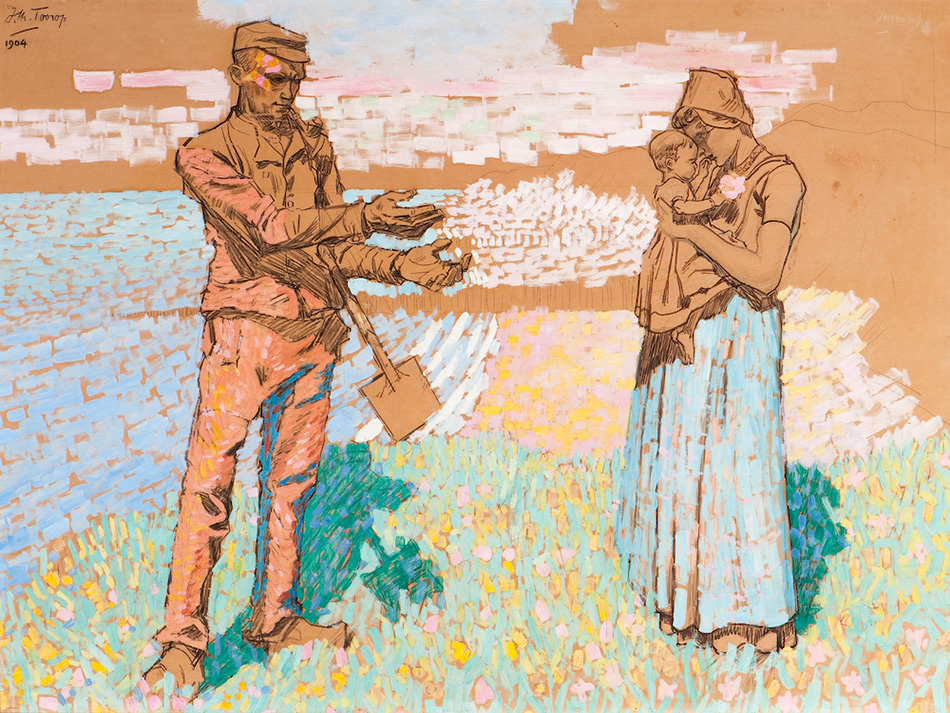 Jan Toorop
(Poerworedjo 1858 – The Hague 1928)
‘Oudervreugde’ – Parental Bliss
Signed and dated 1904 u.l.
Signed u.r.
Oil, ink, crayon and pencil on cardboard, 73 x 97.4 cm
Reverse side:
Hand written label by the artist with the title and signature for participation at the exposition of the Sezession in Vienna in 1909.
Provenance:
The grandparents of the present owner were friends of Toorop.
Exhibition:
– Zeeuws Museum Middelburg, Mondriaan en Toorop temidden van hun tijdgenoten in Domburg, 17 September 1994 t/m 15 January 1995.
Literature:
– I. Spaander & P. van der Velde, Reünie op ’t Duin: Mondriaan en tijdgenoten in Zeeland, Waanders Publishers, Zwolle, 1994, page 82, ill. 44.
– H. van der Grinten & P. Thoben, Jan Toorop: De Nijmeegse Jaren 1908-1916, Nijmeegs Museum Commanderie van St. Jan, 1978, page 62 & 63 (ill. with the artist).
N.B.:
The Vienna Secession
After the death of his brother in 1892 Gustav Klimt turned away from the academic tradition. In 1897, together with Rudolf von Alt, Joseph Maria Olbrich and Josef Hoffman he founded the Vienna Secession movement and the magazine VER SACRUM to rebel against the traditional opinions and art of Historicism. He would be chairman untill parting with the movement in 1905.
The Secession desired to create a new art in which architects, sculptors, designers and painters would work in close collaboration. In the Sezessionhaus, the building designed by Josef Olbrich, exhibitions were organised in which innovative artists from home and abroad, such as Jan Toorop, Charles Rennie Mackintosh and Max Klinger, were given opportunity to show their work.(source: http://www.kunstkanaal.net)