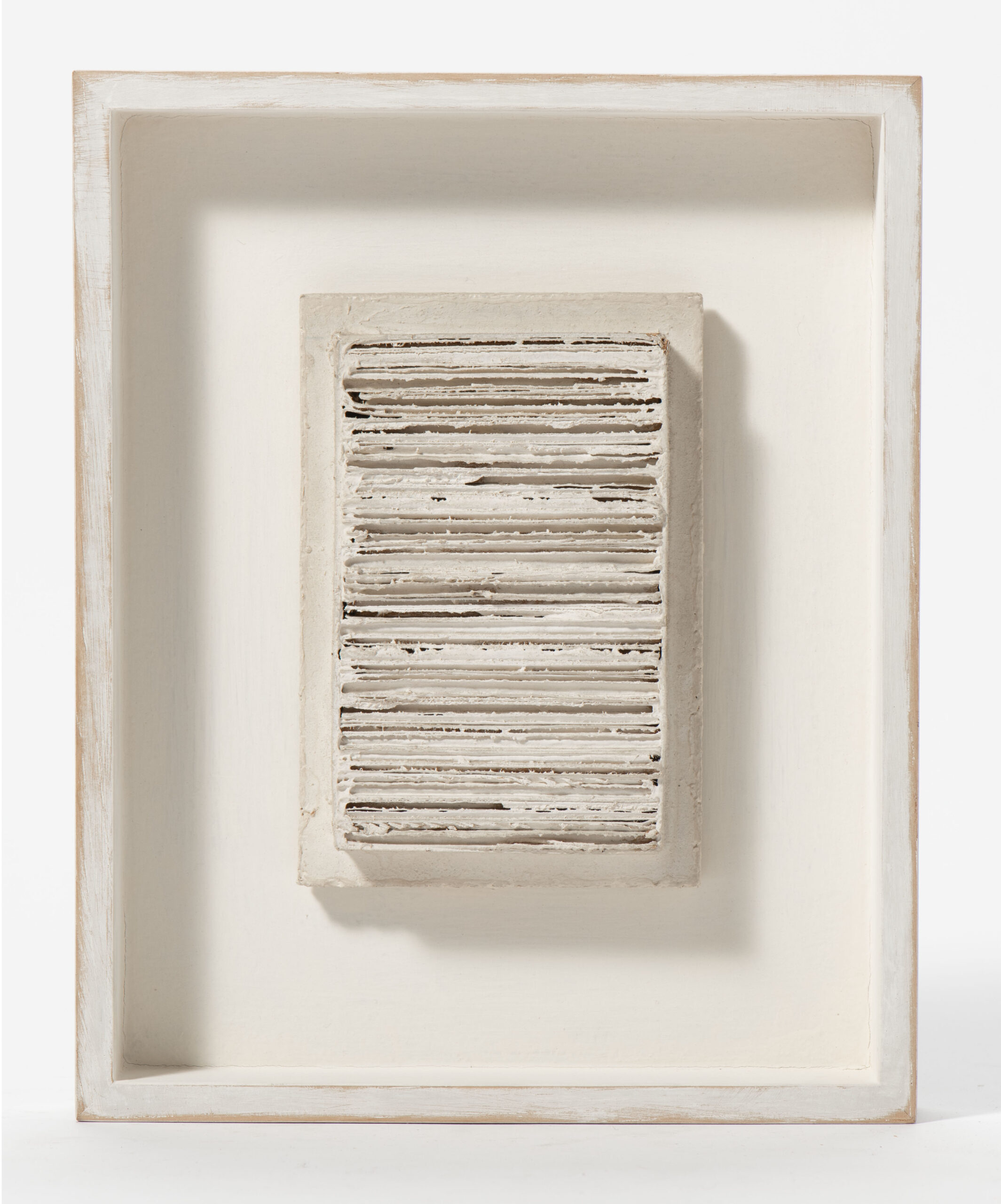 Jan Schoonhoven
(Hof van Delft 1914 – Delft 1994)
Relief (1964)
Signed and dated 1964 on the reverse
Corrugated cardboard on board with latex paint, 15 x 10.1 cm
Provenance:
– Private collection, the Netherlands
– Auction Glerum, Amsterdam, 26 May 2003, lot 305
– Van Hulten Collection, the Netherlands
Literature:
P. Morrens, G. Murray, e.a., A Collector’s Eye, Peter Foolen Editions, Eindhoven, 2013, p. 92 (ill.)
Exhibited:
– Museum Belvedère, Heerenveen, A Collector’s Eye, Contemporary Art from the Van Hulten Collection, Heerenveen, 7 September – 24 November 2013
– Museum Dr8888, Drachten, Kracht van Karton, 22 April – 8 July 2018
Note:
The Van Hulten Collection includes an impressive collection of works by artists from the 17th and 19th Century, Chinese Song ceramics, as well as works by contemporary artists, such as Jan Schoonhoven, Yves Klein, Antonio Calderara, JCJ Vanderheyden, Giorgio Morandi, Sol LeWitt, Geer van Velde and Edda Renouf. For nearly 40 years, Jan Schoonhoven worked on his highly distinctive monochrome reliefs, made of papier-mâché, paper, and cardboard. These works of art brought him international acclaim. Schoonhoven found his signature style at the beginning of the 1960s: the varied reliefs and drawings, filled with systematic repetitions, which he produced only in the evenings and during the weekends, after returning home from his job at the PTT (Royal Dutch Post). As a person and as an artist, Schoonhoven had a compulsory need for regularity and order, which are also the two keywords to describe his art. His artistic practice is about the right feeling for rhythm, with a sublime execution of line, a fine play of light and shadow, and subtle aesthetics based on sobriety and regularity. This work on offer was created before Schoonhoven began to employ assistants to aid in his works’ construction, and it exhibits the intimate scale and artisanal magic that characterise his early reliefs. The work’s imperfect iterated horizontal shapes, executed in papier-mâché and painted entirely white, have an irresistible tactile appeal. Working with pure, unadorned form, Schoonhoven exalted the simplicity of his materials, which are austere yet elegant, as you can see from this outstanding relief. Therefore, this work, which Schoonhoven carefully handmade in his small Delft apartment, is a virtuoso example of his distinctive minimalist practice. As Janneke Wesseling has observed of Schoonhoven: “Within the strict limitations which he has placed upon himself, Schoonhoven has grown to be a formidable master. His oeuvre echoes various movements in contemporary art-abstract expressionism, minimal art, fundamental art, ‘neo-expressionism’-without ever losing any of its own identity”.