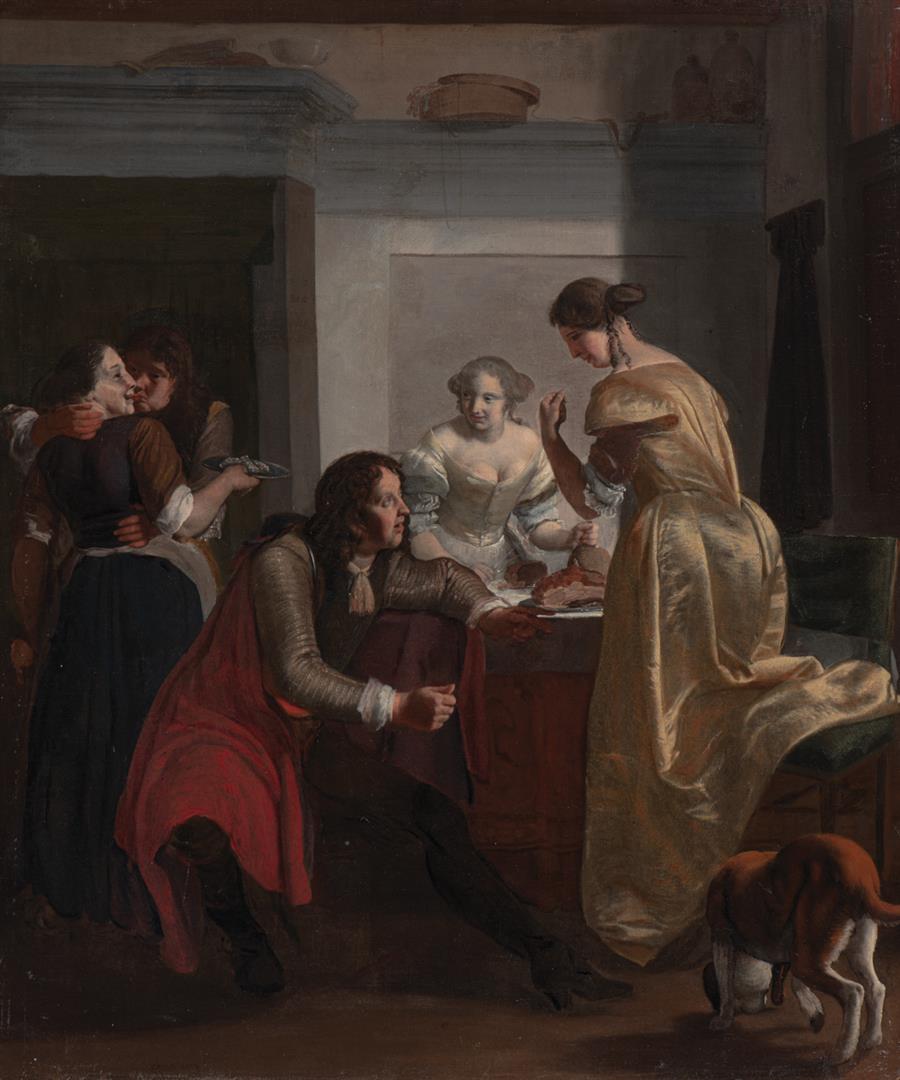 It is most likely that the present lot is the first known Western painting depicting the hand game ‘Rock Paper Scissors’. The game is usually played between two people, in which each player simultaneously forms one of three shapes with an outstretched hand. These shapes are ‘rock’ (a closed fist), ‘paper’ (a flat hand), and ‘scissors’ (a fist with the index finger and middle finger extended, forming a V).
The first known mention of the game was in the book Wuzazu by the Chinese Ming-dynasty writer Xie Zhaozhi (c. 1600), who wrote that the game dated back to the time of the Chinese Han dynasty (206 BC – 220 C). In the book, the game was called ‘shoushiling’.
Throughout Japanese history there are frequent references to sansukumi-ken, meaning ken (fist) games where ‘the three who are afraid of one another’ (i.e. A beats B, B beats C, and C beats A). This type of game originated in China before being imported to Japan and subsequently also becoming popular among the Japanese.
The earliest Japanese sansukumi-ken game was imported directly from China. In mushi-ken the ‘frog’ (represented by the thumb) triumphs over the ‘slug’ (represented by the little finger), which, in turn prevails over the ‘snake’ (represented by the index finger), which triumphs over the ‘frog’. Although this game was imported from China the Japanese version differs in the animals represented.
Today, the best-known sansukumi-ken is called jan-ken, which is a variation of the Chinese games introduced in the seventeenth century. Jan-ken uses the rock, paper, and scissors signs and is the game that the modern version of rock paper scissors derives from directly. Hand-games using gestures to represent the three conflicting elements of rock, paper, and scissors have been most common since the modern version of the game was created in the late nineteenth century, between the Edo and Meiji periods.
In the 1921 article about cricket in the Sydney Morning Herald described ‘stone, scissors, and paper’ as method which he “came across when travelling on the Continent once”. Another article, from the same year, in the Washington Herald described it as a method of Chinese gambling. In Britain in 1924 it was described in a letter to The Times as a hand game, possibly of Mediterranean origin, called ‘zhot’. A reader then wrote in to say that the game ‘zhot’ referred to was evidently Jan-ken-pon, which she had often seen played throughout Japan. Although at this date the game appears to have been new enough to British readers to need explaining, the appearance by 1927 of a popular thriller with the title Scissors Cut Paper, followed by Stone Blunts Scissors (1929), suggests it quickly became popular.

Handshakes have long been crucial to art world deals, but in 2005, a different gesture determined the outcome of a multimillion dollar agreement. The Japanese electronics giant Maspro Denkoh Corporation had decided to auction off works from its art collection – described by Jonathan Rendell as “a jewel in the crown” – worth about $20 million, during the Impressionist and modern art sales in New York. Unable to choose whether to consign the trove to Sotheby’s or Christie’s, company president Takashi Hashiyama put the decision in the auction houses’ hands: representatives from each company would visit Maspro’s Tokyo office to compete in a game of rock, paper, scissors. The rival auction houses approached the impending game very differently. Kanae Ishibashi, the then president of Christie’s in Japan, took the challenge seriously. She consulted the 11-year-old twin daughters of Nicholas Maclean, the international director of Christie’s Impressionist and modern art department at the time. The twins suggested Ishibashi to start with scissors as “Rock is way too obvious, and scissors beats paper”. Sotheby’s, on the other hand, believed the game would come down to chance and had no strategy in mind. Instead of the usual method of playing the game with the hands, the teams were given a form explaining the rules. They were then asked to write one word in Japanese – rock, paper or scissors – on the paper. Christie’s was the winner: scissors beat paper.