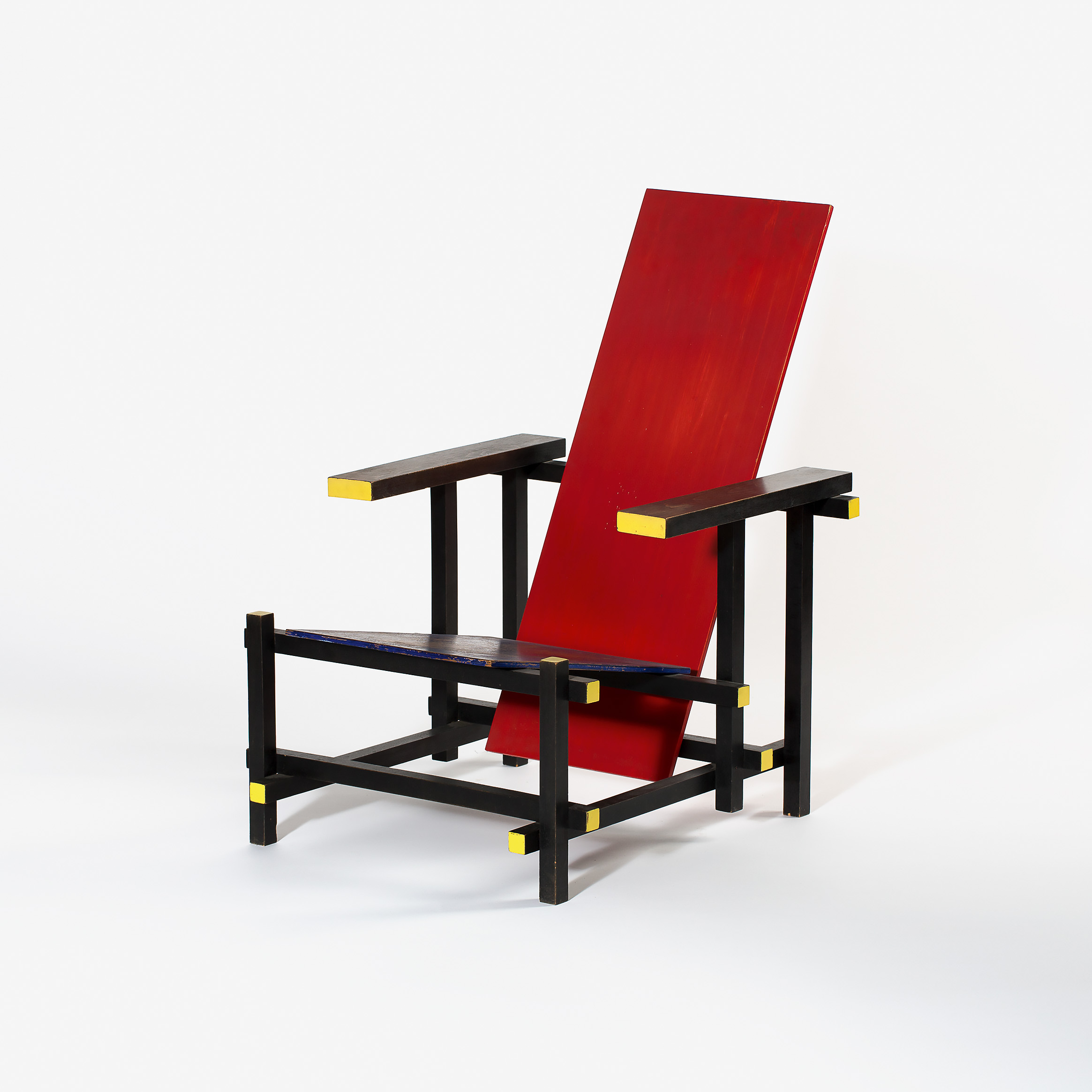 Gerrit Rietveld
(Utrecht 1888 – 1964)
Red and Blue chair
Design 1918, executed by Gerard A. van de Groenekan circa 1960
Painted beech and multiplex, 85.7 x 65.7 x 82.2 cm
Provenance:
Collection Henk & Truus Peeters, Hall
Literature:
Comparable examples were illustrated in:
– De Stijl, September 1919, page 133
– Th. M. Brown, The Work of Gerrit Rietveld: Architect, Utrecht, 1958, page 18-20, 79 & 164.
– M. Küper & I. van Zijl, Gerrit Th. Rietveld 1888-1964. Het volledige werk, Utrecht, 1992, pag. 74. 75 & 79, no. 35 (ill.).
– P. Vöge, The Complete Rietveld Furniture, Rotterdam, 1993, page 58 & 59, No. 46.
– A. Dosi Delfini et al., The Furniture Collection Stedelijk Museum Amsterdam, 1850-2000 From Michael Thonet to Marcel Wanders, Rotterdam/Amsterdam, 2004, page 49, 140, 295 & 296.
– I. van Zijl, Gerrit Rietveld, New York, 2010. page 35, 65 & 66.
N.B.I:
The Red and Blue chair is considered one of the most well-known works in the ouvre of Rietveld. The first, unpainted prototype of this armchair, with visible carpenters’ joints, was designed by the artist circa 1918. After Rietveld had joined the De Stijl movement, the chair was given its famous primary-coloured details and thus became the first icon of the movement. Theo Van Doesburg (1883-1931), founder of the magazine De Stijl, considered this chair as sculpture for the futuristic interior: “This piece of furniture, as a result of its new style, answers the question which position sculpture will take in the new interior: our chairs, tables, cupboards and other articles of everyday use, those will be the new sculptures in our future interiors.”
Striking is the construction of the chair: the joints are invisible, making the lines and surfaces appear continuous, and to move in space.
The Red and Blue chair by Gerrit Rietveld is in the collection of the Stedelijk Museum Amsterdam, the Centraal Museum, Utrecht and the Gemeentemuseum, The Hague.
N.B.II:
This was Henk Peeters’ favorite chair, which explains the wear to the seat and armrests. His wife, Truus Peeters-Nienhuis remembers the consequences clearly:
“At the time the artists of the Nul-movement looked like businessmen. They wore white shirts, because they didn’t want to look like typical artists with a beret and goat hair socks. The red backrest of the Rietveld chair however left stains on the back of the white shirts. Therefore Henk often went about with a red back, giving him the appearance of a genuine artist yet again.”