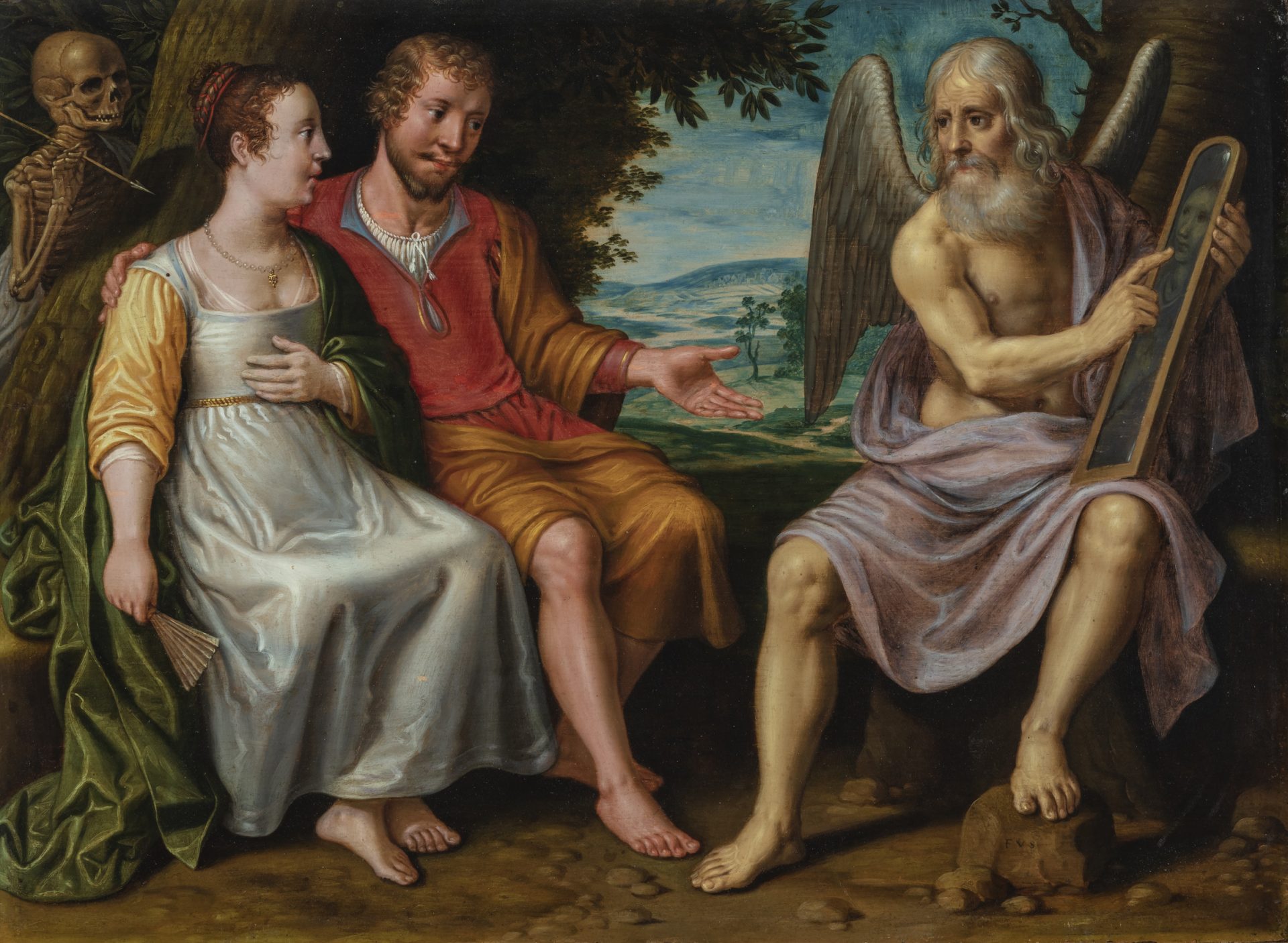 Because Floris van Schooten is best known for his kitchen interiors and fruit- and banquet-still lifes, this present lot is a very rare and remarkable masterpiece in his oeuvre. In this outstanding allegory of time, life, and death, the Haarlem painter depicts the fragility and transience of life. Especially in the seventeenth century, when people had to live under strict religious rules, the Vanitas theme became a popular genre for Dutch masters who utilised the still-life form to evoke the fleeting quality of life. However, vanitas representations in the form of allegories, such as this current lot, are much less common, and in the specific impermanence theme of “love and death,” this work on offer is extremely rare.

In this Vanitas allegory, Van Schooten was strongly inspired by the emblematic character and the current symbolism, as depicted by Carel van Mander in his Schilderboeck: The young woman, seated next to her husband, is looking in the mirror, which is held by the Time and which reveals the aged version of her young face. Behind the woman, Death lurks, ready to hit her with an arrow. The lady wears her hair tied up in a bun, a sign of finery and the obscuration of aging. Her left hand, which is resting on her heart, indicates fidelity in marriage. She is holding a fan in her right hand to protect her from immodest glances, and the position of her feet (foot on foot) represents the tranquilly that is sought.

Her husband is sitting against a walnut tree, a symbol of marriage, while he lays his right hand on her shoulder and holds his left hand open in front of a landscape that symbolises the transience of nature. Time appears as an elderly man with a mirror as his attribute. In the sixteenth and seventieth centuries, Time became known as the revealer of the gradual decay of beauty and health. His wings represent the speed at which time flies by, and his left foot placed on a rock indicates the inescapability of his intentions. His mirror reveals the relativity of youth and beauty.

The colours in which Van Schooten painted the clothing have a symbolic meaning as well; the green of the cape, the colour of hope, releases the white, the colour of innocence, in which the gown is painted. The reds and ochres in the man’s clothing indicate love and affection. Time wears its drapery in violet-white, the colour of steadfastness.
* Condition report available upon request