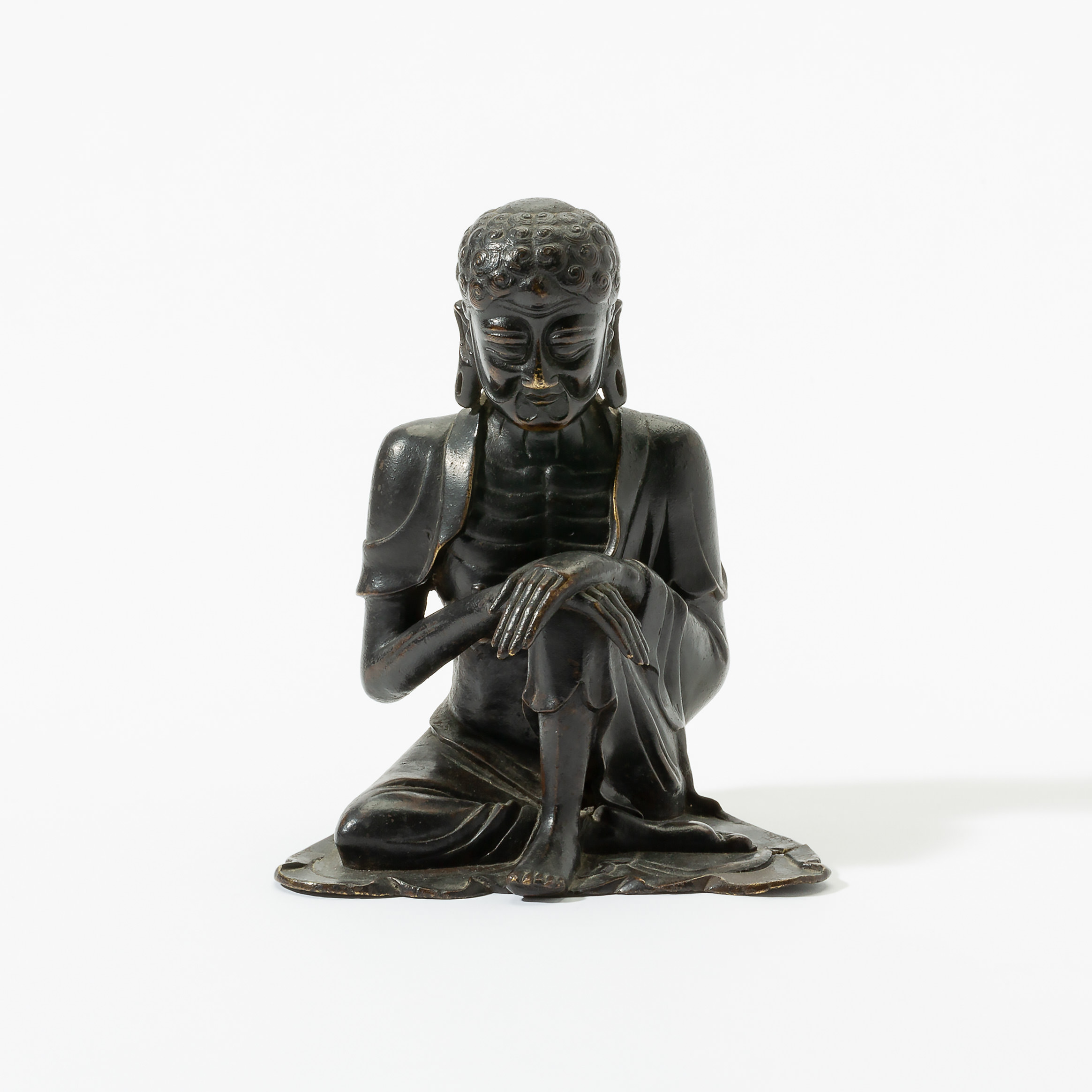 A rare Chinese bronze figure of the ascetic Buddha Shakyamuni
17th/18th century
The emaciated figure is seated with his long hands supported on his bent raised knee, his dhoti falling open to reveal his skeletal rib cage, his face finely modelled with downcast eyes and benign expression, the bronze patinated to a dark brownish-black colour with traces of gilding at the extremities.
H. 16.5 cm
Provenance:
Private collection, the Netherlands
Note:
The present finely modelled figure depicts Shakyamuni Buddha during his long fast under the Bodhi tree, where he sat until he discovered the true nature of existence and suffering and realized how suffering can be ended. His meditation ultimately helped him to attain his enlightenment. It was in the Yuan dynasty that the modelling of Buddha in this manner became popular and a convention in Chinese art. However, according to Sherman Lee and Wai-kam Ho in Chinese Art Under the Mongols: The Yuan Dynasty (1279-1368), 1968, p. 124, ’the prototype could be traced back at least to Kuan-hsiu’s Sixteen Arhats of the Five Dynasties period, or Buddhist paintings of the ninth and tenth centuries showing hermits and the familiar figure of Vasu in Tun-huang and Central Asia.’
Compare a similar bronze figure of Buddha from the Yuan dynasty, sold at Sotheby’s Hong Kong, 4 April 2012, lot 164. See also a lacquered gilt-bronze Shakyamuni figure, included in the Oriental Ceramic Society exhibition The Arts of the Ming Dynasty, London, 1957, cat. no. 292, from the Sedgwick collection, sold at Sotheby’s Hong Kong, 2 July 1968, lot 37; and another example sold at Sotheby’s London, 27 November 1973, lot 40.
Compare also a lacquer example with traces of colour and gold, in the Detroit Institute of Arts, Detroit, illustrated ibid., pl. 20, together with an unusually large gilt-bronze example in the Cleveland Museum of Art, Cleveland, pl. 18, and a third sculpture made in dry-lacquer in the University Museum, University of Pennsylvania, Pennsylvania, pl. 19.