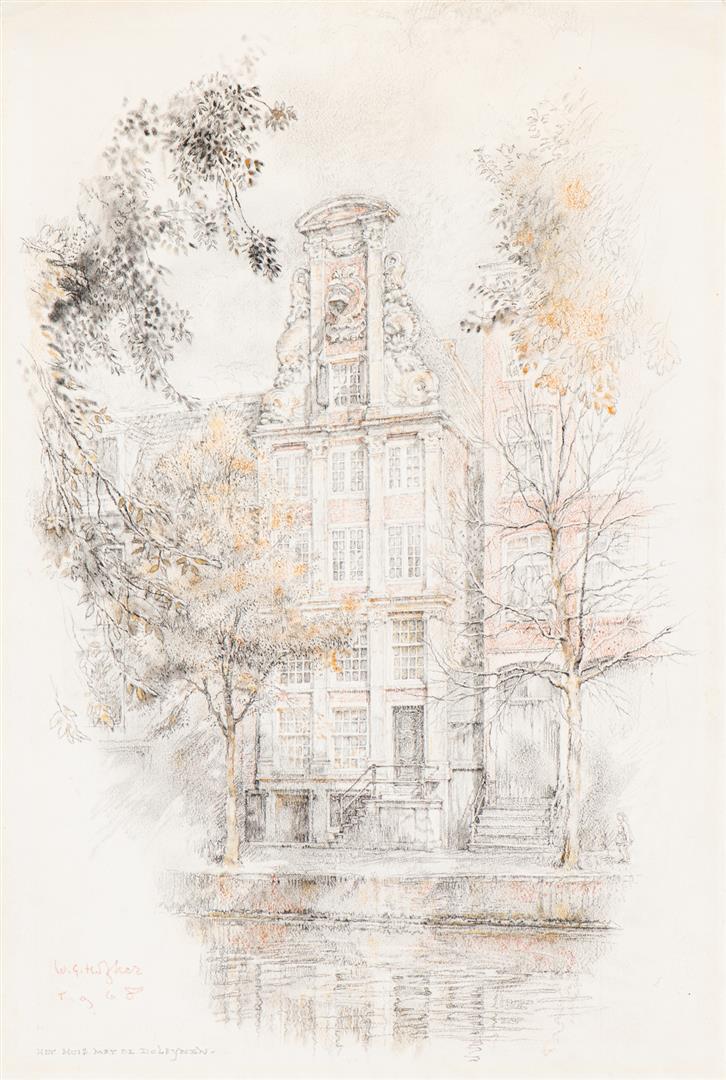 Willem Gerard Hofker
(The Hague 1902 – Amsterdam 1981)
The House with the Dolphins
Signed, titled and dated 1968 lower left
Conté crayon and pencil on paper, 58.3 x 39.1 cm
Provenance:
Private collection, the Netherlands
Literature:
– B. Carpenter; Willem Hofker; painter of Bali, Pictures Publishers, Wijk en Aalburg, 1993, p. 213, ref. no. 1189 ;- with additional inv. no. 10 by Ms. Seline Hofker
– T. Koot, Along the Amsterdam Canals…; Reproductions in black of original drawings by Willem G. Hofker, Nijgh & Van Ditmar, The Hague/Rotterdam, 1973, pp. 60-61 (ill.)
Note:
“The first thing that strikes you when opening the book is the beauty and purity of the drawings”, An Simons wrote in the Lectuurgids of 1975 regarding the recently published book Langs de Amsterdamse Grachten (“On the Canals of Amsterdam”).

Willem Gerard Hofker (1902-1981) is the gifted portrait painter of the cityscapes which are pre-eminently seen as the emblem of 'cultural heritage of Amsterdam'. Ton Koot (1907-1986, former secretary of the Rijksmuseum) provided the text parts of the book and invited Willem Hofker to furnish the book with illustrations. Hofker accepted the assignment to execute this series of city drawings for a book with 'his' Amsterdam as subject. A series of 42 masterly drawings followed that have been worked out to the smallest detail. For example, take the facade ornaments and the high windows: everything so characteristic of Amsterdam. Willem Hofker came to live in Amsterdam as a sixteen-year-old boy who – with his sharp-sighted attitude – already perceived the decline of the historical beauty of the capital from an early age on. This decline remained a concern for the rest of his life. Accordingly, many drawings within the artist's oeuvre carry an underlying message, such as: 'degradation, vanished or destroyed'. Hofker's creative output became a homage to the beloved city, as he commented himself: “I have always felt that I had to record what has been done by the authorities; that I should pay tribute to the people responsible for the restorations. Hence, the book is a modest, obviously incomplete account of their work.” (Volkskrant, December 27, 1974).

'The House with the Dolphins', Oudezijds Voorburgwal 19, Amsterdam. The richly ornamented 'pilaster-halsgevel' (neck-gable façade) dates back from 1656. The house abundantly decorated with 'wing pieces', flanking the top part of the facade, are executed as mirrored dolphins sliding downwards and are outlined in Hofker's drawing by trees. The outstanding neck-gable façade plays the leading role in this tranquil atmosphere created by Hofker which emphasizes the serenity of the city, without the intervention of rows of parked bicycles or cars.
Merely the rustle of leaves and the sloshing of the dark water in the canal appeal to the imagination. This drawing evokes nostalgia for earlier times, as Hofker would have said. The House with the Dolphins has been registered as a national monument since 1970.

Estimate
€ 1.000 - 2.000
Result
€ 1.600
We use cookies on our website to provide you with the most relevant experience by remembering your preferences and repeat visits. By clicking "Accept" you agree to the use of ALL cookies.
Cookie settingsACCEPT
Manage consent