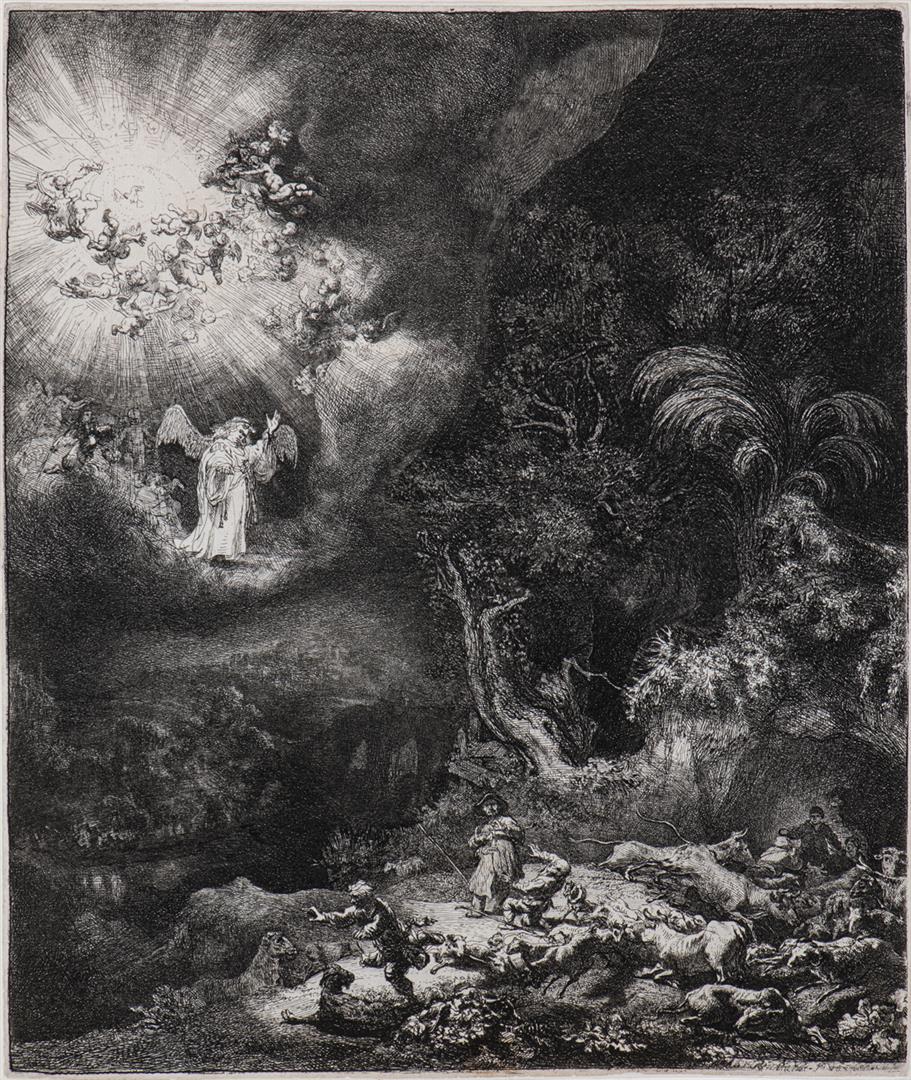 Rembrandt Harmensz. from Rhine
(Leiden 1605 – Amsterdam 1669)
The Angel Appearing to the Shepherds
Third state (of three), impression made circa 1650, original plate made in 1634, on laid paper. With watermark Fool's Cap with five-pointed collar (Hinterding catalog, variant Ec, dated circa 1650). Annotated in pen P. Remy (Lugt 2136), and an annotation mentioning the provenance from the Collection of the Duc d'Orleans.
Etching, engraving and drypoint, 258 x 213 mm (plate size) / 262 x 223 mm (sheet size)
Provenance:
Private collection, the Netherlands
Literature:
– Bartsch, Hollstein 44
– New Hollstein 125 as third state (or six)
Note:
P. Remy was a major art dealer and auctioneer in Paris, starting in 1737. After 1750, P. Remy took over Gersaint's position as the leading expert compiling the catalogs of celebrated collections of paintings, including those of Blondel de Gagny, Randon de Boisset , Duc d'Orleans and the Prince de Conti.

Produced at a relatively early period in his career, this would undoubtedly have been Rembrandt's most spectacular print to date. The scene depicts how the herdsmen in Luke 2:8-20 were confronted in the middle of the night by a large winged angel, lit by the glory of God, who came to announce the birth of Christ. The composition reflects the drama of the event, and draws theatrical swirling style of contemporary Baroque painting. To create this etching, Rembrandt worked from the dark areas into the light of the foreground. Although he had painted night scenes before, this was his first attempt at duplicating the effects in etching.

Estimate
€ 10.000 - 20.000
Result
€ 17.500
We use cookies on our website to give you the most relevant experience by remembering your preferences and repeat visits. By clicking “Accept”, you consent to the use of ALL the cookies.
Cookie settingsACCEPT
Manage consent