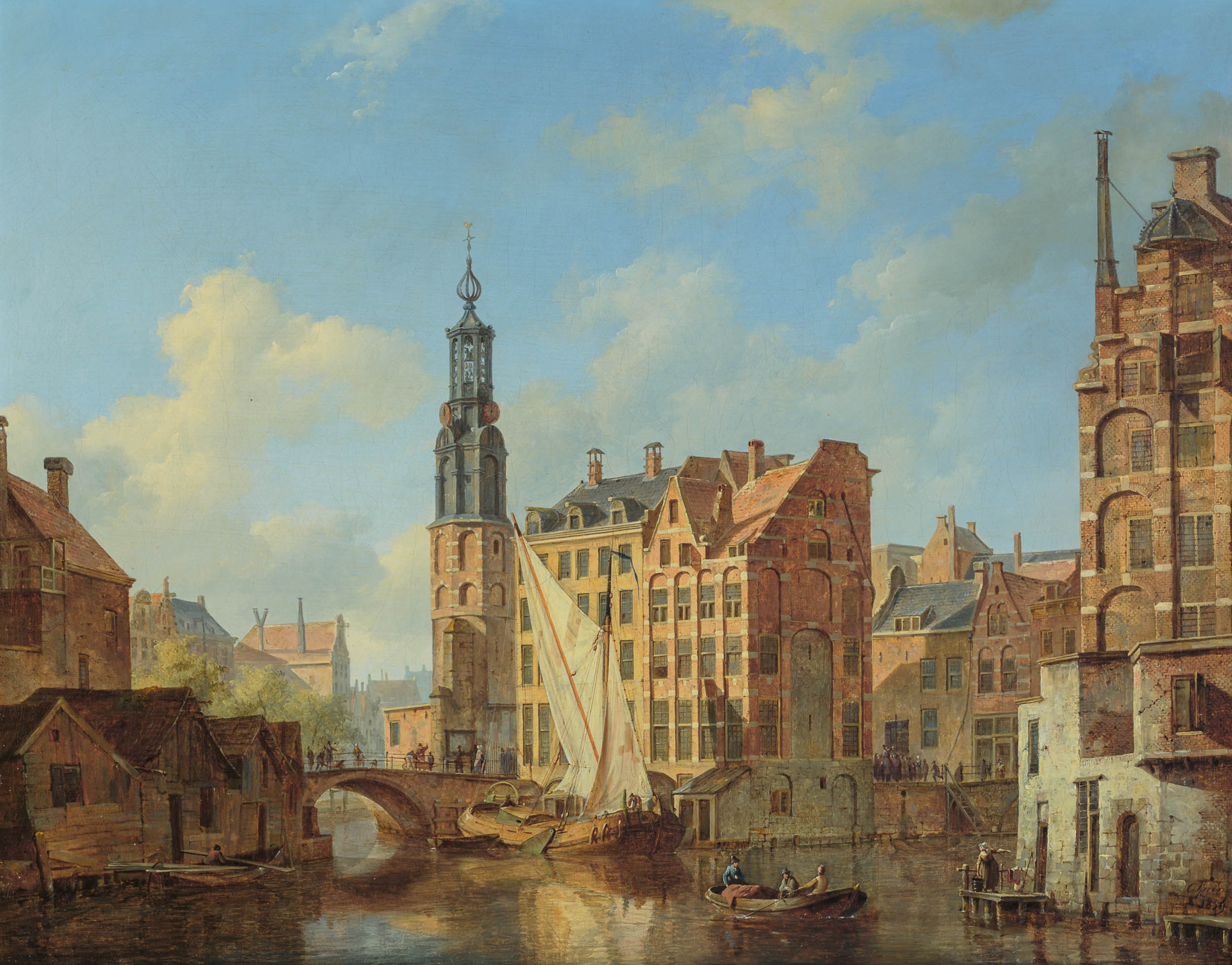 Cornelis Springer
(Amsterdam 1817 – Hilversum 1891)
The Rokin near the Mint Tower, with the So-called English Houses in Amsterdam (The Rokin near the Mint Tower, with the So-called English Houses in Amsterdam)
Signed and dated 1839 lower right
Oil on canvas, 56.1 x 72 cm
Provenance:
– Gebr. Douwes Fine Art, Amsterdam (inv. no. 6759)
– Collection JWR Dreesmann, Amsterdam
– Auction Frederik Muller, Amsterdam, 22 March 1960, no. 5470
– Auction Van Marle and Bignell, The Hague, September 10, 1979, cat. no. 617, lot 439
– Collection drs. MTT Diederiks, The Hague
- Private collection, the Netherlands
Literature:
– W. Laanstra, HC de Bruijn, JHA Ringeling, Cornelis Springer (1817-1891), Utrecht, 1984, p. 43, no. 39-4 (ill.)
– W. Laanstra, Cornelis Springer: Painted Cities, Amsterdam, Kunstwerk/Rokin Art Press, 1994, p. 13, ill. no. 7
Note:
The Dutch nineteenth century cityscape painter, Cornelis Springer, was a pupil of his father, the carpenter Willem Springer. Cornelis is known for his watercolors, etchings, and drawings – especially of city views and town scenes. Springer was trained as a house painter by the house and carriage painter Andries de Wit. His oldest brother Hendrik Springer, who was an architect, taught him architectural drawing and the principles of perspective. Springer lived most of his life in Amsterdam, but traveled around the country to make sketches on the spot for his cityscapes, in which town halls often played an important role. He was awarded the Leopold order of Belgium in 1865, and in 1878 he was invited with Jozef Israëls to advise the Dutch Ministry of Public Affairs on the plans for the Rijksmuseum. Springer's work has long been praised: even a print based on this particular painting has been published by the then famous art dealer Frans Buffa. Cornelis Springer's work can be seen in the Museum of Fine Arts Boston, the Philadelphia Museum of Art, the Rijksmuseum Amsterdam, the Amsterdam Historical Museum, the Dordrecht Museum, the Teylers Museum, among many others.

Estimate
€ 25.000 - 35.000
Result
€ 40.000
We use cookies on our website to provide you with the most relevant experience by remembering your preferences and repeat visits. By clicking "Accept" you agree to the use of ALL cookies.
Cookie settingsACCEPT
Manage consent