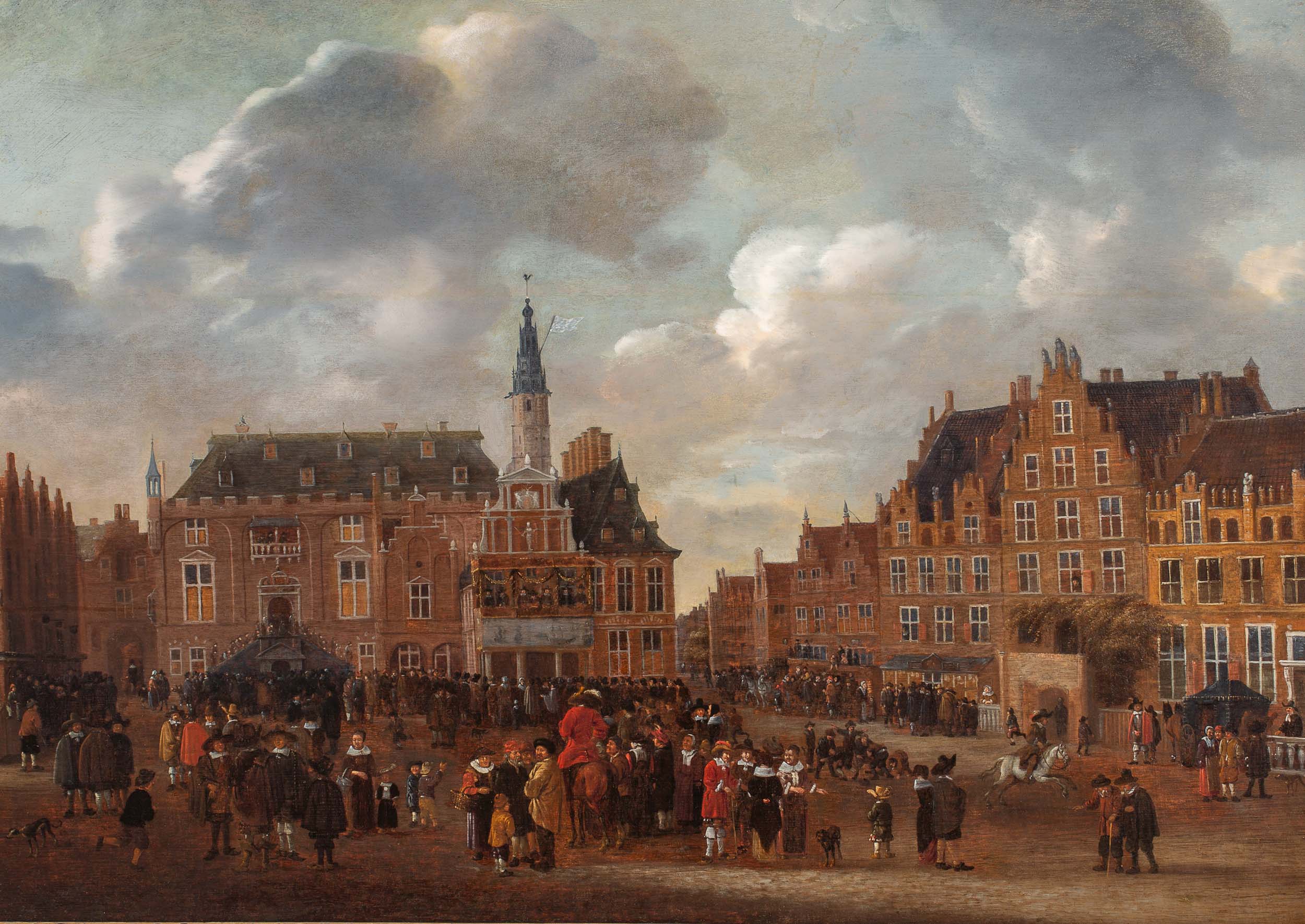 Gillis Rombouts
(Haarlem 1630 – 1672)
The Announcement of the Peace Treaty of Münster in 1648 from the balcony of the Town Hall of Haarlem
Indistinctly monogrammed over the archway center right
Oil on panel, 78.2 x 110 cm
Provenance:
– Auction A. Mak, Dordrecht, 24 – 26 October 1916, lot 141 (ill.)
– Collection dr. ir. AM de Wild, The Hague
– Collection Jacob Hartog, New York
– Estate of Henriette Hammonds
-Lawrence Steigrad Fine Arts, New York City (TEFAF 2008) (incl. copy invoice)
- Private collection, the Netherlands
Note:
Very little is known about the life of Gillis Rombouts. A master in the Haarlem Guild of St. Luke by 1652, he mainly painted landscapes as well as market and town scenes. The Peace of Münster ended the Eighty Years' War between Spain and the Dutch Republic (1568-1648), and was the most important peace treaty of the seventeenth century in the Netherlands – as it marked their recognition as a sovereign state. The event took place on 30 January 1648, but was only announced on June 5th of that year, resulting in widespread celebrations throughout the country. Haarlem's solemnity and joy are forever captured in this very detailed and architecturally exacting recreation of the announcement. The view of the Market Square or 'Grote Markt' that Rombouts painted remains today virtually unchanged. The most dominant architectural feature is the town hall, erected on the site of residence built in 1250 by Count William II of Holland and rebuilt after a destructive fire in 1351. Rombouts depicted the announcement of the peace in Haarlem Market Square several times with varying figural group; of which one can be found in the Michaelis Collection in Cape Town, South Africa.

Estimate
€ 6.000 - 10.000
Result
€ 26.000
We use cookies on our website to provide you with the most relevant experience by remembering your preferences and repeat visits. By clicking "Accept" you agree to the use of ALL cookies.
Cookie settingsACCEPT
Manage consent