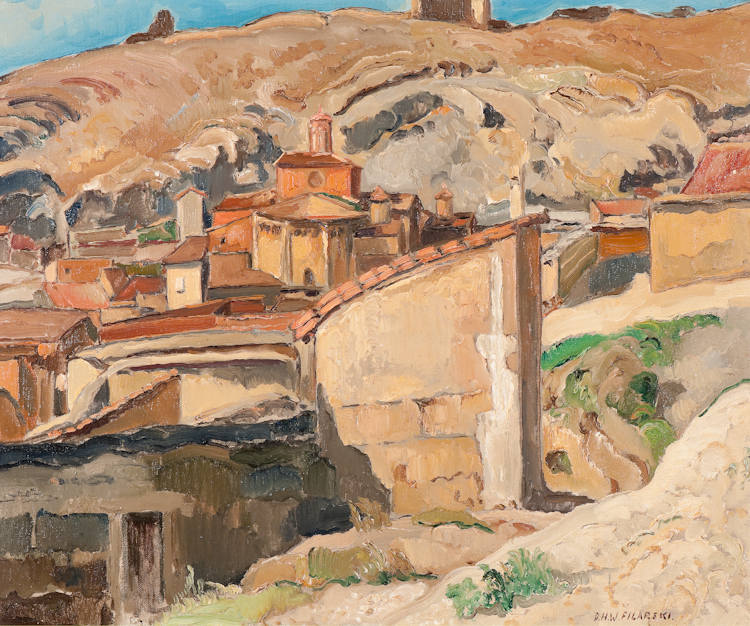 Dirk Filarski
(Amsterdam 1885 – Zeist 1964)
Daroca (1935)
Signed lr
Oil on canvas, 54.3 x 65.1 cm
Provenance:
Auction Christie's, Amsterdam, September 2, 2003, lot 380
NB:
Born in Amsterdam, the painter Dirk Filarski commenced his studies in 1901 as a pupil at the applied arts school Quellinus and later at the Rijksschool for applied arts in Amsterdam. There he made friends with whom he stayed in touch for many years, including Matthieu Wiegman. After completing his studies he worked in Bergen aan Zee for a short period of time, but Filarski soon took the decision to take up traveling. In 1912 the painter left for Switzerland, where he produced paintings of mountainous landscapes in striking colours, such as purple, pink, lilac-blue and dark green. In 1917 Filarski returned to The Netherlands, during this period he mainly worked on landscapes in often darker colours. More than five years later Filarski switched to working in brighter colours. At the time he and his family lived in the village of Bergen in a house that was originally built for the painter Charley Toorop. He continued to travel, during this period mainly in Southern Europe, where he worked in various locations, including Menton and Roquebrune, and later on he and his family settled in Tourettes-sur-Loupe. Characteristic for his works from this period is the use of the colors green, yellow and light brown. Not much later Filarski abandoned the use of large planes from his works and started to concentrate on the details of his subjects. In the period from 1929 onwards Filarski, despite his financial problems at the time, remained a fanatical traveller. He painted works in Morocco, Paris, Venice and Spain. During the thirties Filarski mainly worked in Spain in locations such as Teruel and Daroca. One of his works produced in Teruel was awarded the golden Arti-Medal. He depicted the picturesque town of Daroca colorfully in yellow, orange, light brown and greenish tones.

Estimate
€ 2.500 - 3.500
Hammer amount
€ 3.800
We use cookies on our website to provide you with the most relevant experience by remembering your preferences and repeat visits. By clicking "Accept" you agree to the use of ALL cookies.
Cookie settingsACCEPT
Manage consent