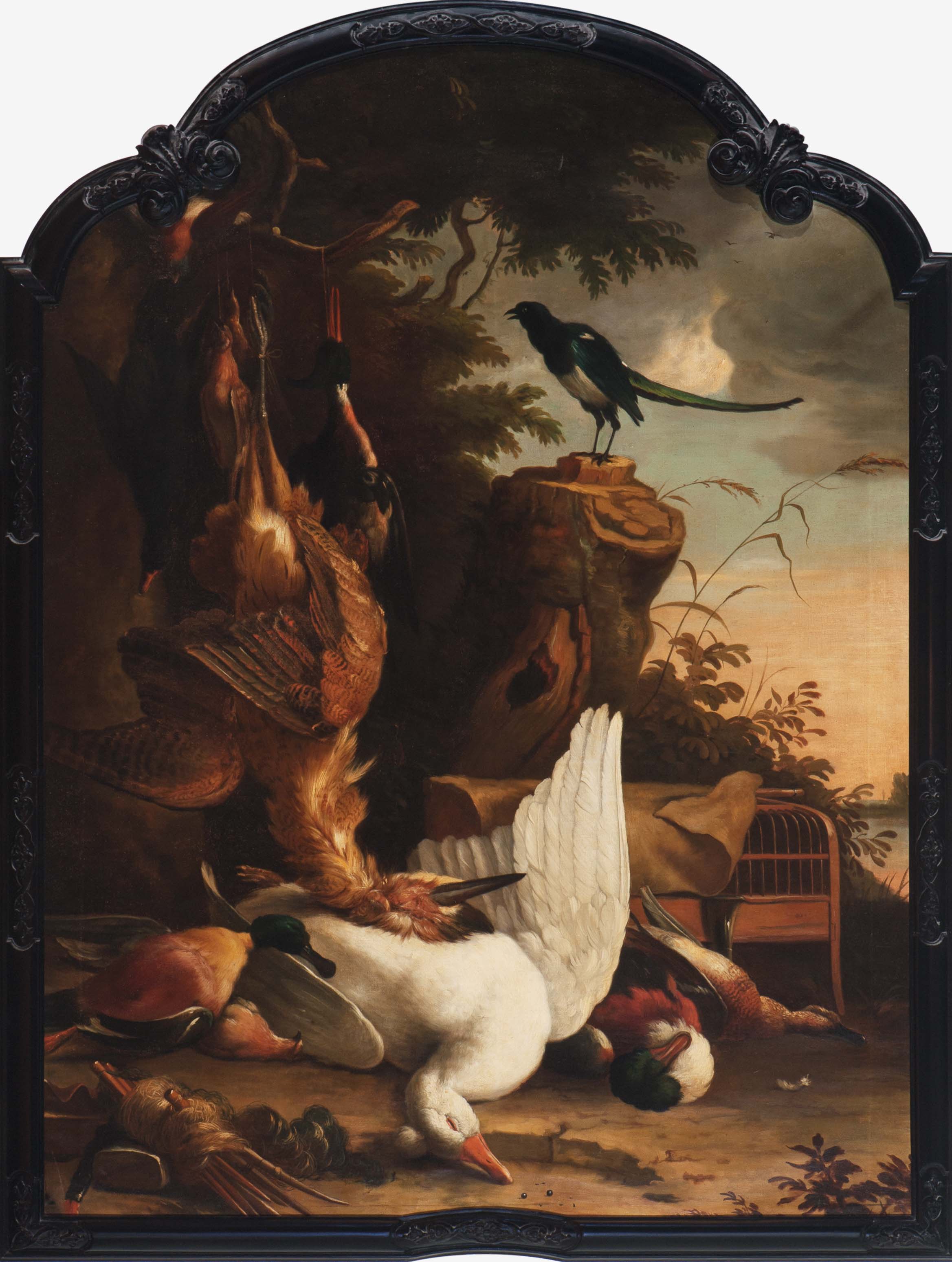 Arnold van de Laar
(Den Bosch 1886 – Vught 1974)
Hunting booty from a magpie on a stump, known as 'The Philosophizing Magpie' after Melchior d'Hondecoeter
Signed, dated 1918 and annotated copy to M. D'Hondecouter. lr on the rear flap
Oil on canvas, 133.8 x 99.5 cm (approx. 155.3 x 99.5 cm incl. rear flap)
Provenance:
– Private collection, Wassenaar
– Unknown auction, The Netherlands
– Private collection, The Netherlands
Literature:
M. Atena and M. van der Laar, 'Copying in the Rijksmuseum: The copies of painter/restorer Arnold van der Laar (1886-1974)', Bulletin of the Rijksmuseum vol.50, no.1 (2002), page 44
NB I:
Originally the work was of a larger size but as a result of reframing the lower part has been folded over.
NB II:
The work offered here is a copy after Hunting Booty by a Magpie on a Tree Stump/The Philosophizing Magpie (c. 1678) by Melchior d'Hondecoeter in the collection of the Rijksmuseum in Amsterdam. Arnold van de Laar trained to become a restorer in Brussels and after completing the academy he worked as a restorer for the Rijksmuseum. In addition to restoring works Van de Laar also painted excellent copies of works in the collection of the Rijksmuseum. This practice of copying was seen as a typical nineteenth century phenomenon, as copying of works in museums was practiced widely by many artist's pupils. Since the eighteenth century museums served a supporting role in the education of young painters. Dutch students painted in the Mauritshuis in The Hague or the Trippenhuis in Amsterdam. The Rijksmuseum housed a drawing school which functions up to this day. To be allowed to copy the artist had to be enlisted in the copy register of the respective museum, and were handed a proof of permission. This proof listed the name of the painter, the work to be copied and the measurements of the copy. To distinguish the copy from the original, the size had to deviate to prohibit misuse. Copied paintings not only served as study objects, but were also very popular amongst art lovers.

Estimate
€ 1.000 - 2.000
Hammer amount
€ 3.100
We use cookies on our website to provide you with the most relevant experience by remembering your preferences and repeat visits. By clicking "Accept" you agree to the use of ALL cookies.
Cookie settingsACCEPT
Manage consent